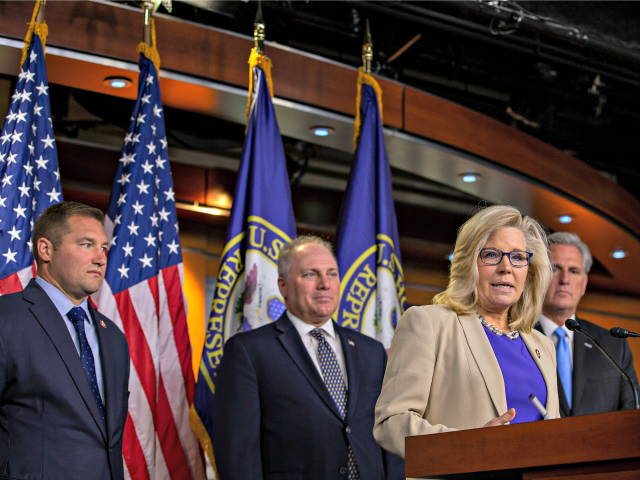 Rep. Liz Cheney (R-WY) on Monday said an intelligence official’s complaint that President Trump sought help from Ukraine in the 2020 elections “is starting to seem like a political setup.”

Cheney tweeted a clip of House Speaker Nancy Pelosi (D-CA) appearing to admit she knew what was in the transcript of a July 25 Trump phone call with Ukrainian leader Volodymyr Zelensky even before the White House released the transcript of the call last Wednesday.

Pelosi, in an interview that aired Sunday on CBS News 60 Minutes, said Trump called her and they discussed the phone call before the transcript was released.

According to the New York Times, Trump and Pelosi’s phone call took place on Tuesday. The White House released the transcript on Wednesday.

But Pelosi said during the interview about her call with Trump, “He told me it was perfect. There was nothing in the call. But I know what was in the call. I mean, we — it was in the public domain.”

When Trump and Pelosi had spoken Tuesday, the call was not yet “in the public domain.”

.⁦@SpeakerPelosi⁩ said on 60 Minutes last night she knew the details of the classified Ukraine call before White House released transcript. This is starting to seem like a political set up. So, Madame Speaker, “what did you know and when did you know it?”

.⁦@SpeakerPelosi⁩ said on 60 Minutes last night she knew the details of the classified Ukraine call before White House released transcript. This is starting to seem like a political set up. So, Madame Speaker, “what did you know and when did you know it?” pic.twitter.com/g5tlL5hBsX

Fred Fleitz, a former CIA analyst and chief of staff to former National Security Adviser John Bolton, has questioned whether the intelligence official who lodged a whistleblower complaint against Trump had help writing the complaint from Democrat lawmakers or their staff members.

He wrote in a New York Post op-ed on Thursday:

I am very familiar with transcripts of presidential phone calls since I edited and processed dozens of them when I worked for the NSC. I also know a lot about intelligence whistleblowers from my time with the CIA.

My suspicions grew this morning when I saw the declassified whistleblowing complaint. It appears to be written by a law professor and includes legal references and detailed footnotes. It also has an unusual legalistic reference on how this complaint should be classified.

From my experience, such an extremely polished whistleblowing complaint is unheard of. This document looks as if this leaker had outside help, possibly from congressional members or staff.

Moreover, it looks like more than a coincidence that this complaint surfaced and was directed to the House Intelligence Committee just after Adam Schiff (D-Calif.), an outspoken opponent of President Trump, expressed numerous complaints in August 2019 accusing President Trump of abusing aid to Ukraine to hurt Joe Biden. This includes an August 28 tweet that closely resembled the whistleblowing complaint.

House Republicans need to ask the whistleblower under oath whether he spoke to the press or Congress about his complaint.