Update (1040ET): The WHO has just wrapped up its now-daily presser for Friday, and it appeared to focus on imminent plans to send a group of a dozen scientists and researchers to Beijing to figure out exactly what the hell is going on.

Much fuss has been made over the past week over China’s continued refusals to allow Americans, or any other foreigners, for that matter, to offer assistance with the virus response. It’s almost as if they’re…hiding something…

Even after yesterday’s big reveal about the change in their ‘pro forma accounting standards’ to reflect a higher death toll and number of confirmed cases (the jump alarmed global investors and prompted a selloff on equity markets), China still won’t let Americans participate in a WHO-sponsored team of 12 researchers who are traveling to the mainland. 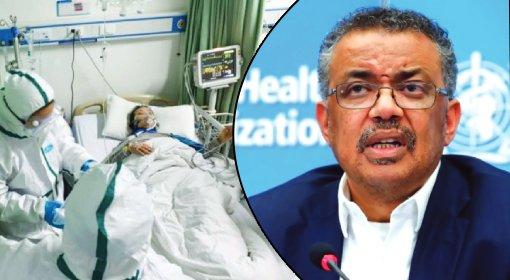 It was a big deal earlier this week when Beijing said it would reluctantly accept the team, ending weeks of suspiciously standoffish behavior (though the WHO bigwigs did travel to Beijing for meetings). But as one analyst said earlier on CNBC: ‘We want to see foreign boots on the ground before we simply take the Chinese at their word’.

It’s also notable how the WHO, initially a purveyor of what seemed like propaganda hot off the presses in Beijing, seems to have turned completely against its benefactor, now treating it with public suspicion.

But after today’s WHO press conference, we were left with the distinct impression that it’s almost as if China doesn’t…want the team to come.

Why else would they have waited to reveal the figures about all the sick doctors and health-care workers until Friday morning in the US and Europe? Just a thought.

Back in the US, a team of American expertss is prepared to travel to China to investigate the outbreak on a moments notice, should they ever receive clearance from a government official, according to Secretary Azar.

As he said (and we noted) earlier, the US is bracing for the possibility that the warm weather doesn’t kill the virus, as President Trump expects.

After imposing strict lockdown conditions on nearly a third of the country, Beijing’s is kicking off its shift to ‘wartime measures’ by adopting even more strikingly draconian measures on the residents of its capital city.

From Feb. 14 on, all people returning to the city will be advised to quarantine for 14 days.

Meanwhile, the BBC reports that hundreds of conference atendees in London have been contacted by health officials after one of them was later diagnosed with the virus.

The person, who has not been identified, attended the UK Bus Summit at the QEII Conference Centre last week. Two Labour MPs who attended the conference said they’re cancelling public events until Feb. 20, just in case.

So far, nine people in the UK have been confirmed to have the virus.

Update (0915ET): Japan has reported 4 new cases of the virus, including one man who recently returned from the US state of Hawaii, and another who helped transfer an infected patient diagnosed aboard “the Diamond Princess”, the cruise ship that has been quarantined in Yokohama for 10 days.

Meanwhile, over in the US, this interview of the director of the CDC warning that the virus could become widespread in the US ‘beyond 2020’.

Update (0850ET): Health and Human Services Secretary Alex Azar said during an interview on Friday morning that more travel restrictions are “on the table,” suggesting that the US might apply similar restrictions to Hong Kong, Singapore, Japan and other Asian countries that have reported rising numbers of cases.

Earlier this month, the State Department raised its travel alert for China to ‘4’, and the US imposed restrictions on foreigners who have recently traveled to China and re-routing Americans who have been to viral hotspots to certain US airports for screening on arrival. These travel restrictions have infuriated Beijing, and prompted a government spokesperson to accuse the US of spreading hysteria.

Even if the virus does “go away” in April, as President Trump has insisted…

“We’re seeing very limited impact here in the United States, but that could change at any time,” HHS Sec. Alex Azar says about coronavirus. “We’re working…with states, local governments and the private sector so we’re ready if it gets here.”https://t.co/Kosiam25fb pic.twitter.com/2xR0UwMuZz

…At this point, Q1 GDP is going to be a disaster anyway, so the US might as well kitchen-sink it.

And it’s not like investors have anything to worry about – bad news is still good news, after all, and the market will simply go to pricing in ~1 Fed rate hike in 2020 to ~2.

Here’s more information on the new cases from SCMP:

Unlike most of the countries that have reported cases of the virus, both Singapore and Hong Kong have confirmed human-to-human transmission within their own borders, meaning the outbreak has already started to spread past the 2nd and 3rd generations of the infected.

Though Singapore is still ahead in terms of number of cases, Hong Kong is giving it a run for its month (though, as we’ve said before, it’s an outbreak, not a race).

Following Chinese health officials’ claim last night that it “double-counted” some deaths (while crematoriums in the country have been working 24/7 as the outbreak has worsened over the last few weeks), the good people at China’s NHC have disclosed for the first time that 1,716 medical workers have been infected across the country.

Does this figure seem a little underwhelming? Officials put the infected medical worker total at 3.8% of 60k+ total cases on the mainland, and added that six medical workers – including the martyr Dr. Li – have died as of Friday. Of course, even if they’re all wearing protective gear (which we know many aren’t especially in the hardest hit areas like Hubei) this number would still seem low for such an infectious disease, given that more than 65,000 cases have been confirmed across the world.

One expert who spoke to the New York Times said the number of infected medical workers is “concerning.”

“I think it’s quite concerning,” said Benjamin Cowling, a professor of epidemiology at the University of Hong Kong. “Healthcare workers face the challenge of caring for a substantial number of patients in Wuhan. It’s worrying to discover that a number of them have been infected.”

From what we’ve heard and read, it seems that shortages of supplies like facemasks, gloves, goggles and other protective gear have persisted, even in Hubei, according to the NYT. During the SARS outbreak, 961 medical workers were infected, representing some 18% of all infections. Since COVID-19 is even more contagious than SARS, we’d expect the number of medical workers infected to be even higher.

After expressing skepticism about Beijing’s response to the virus earlier in the week, it looks like the WHO is back to shilling for the Communist Party, claiming overnight that the jump in cases in China shouldn’t be characterized as a “spike,” and that it’s normal to change how cases are defined.

Across the mainland, the Chinese people, who have been frustrated by the government’s dissembling, have come up with jokes like this one.

Given everything we’ve learned about the virus, and all the reports about shortages of medical supplies like facemasks across the country, but especially in Hubei Province, we suspect that the real number is much, much larger. It’s just the latest evidence that Beijing hasn’t given up on doctoring its disease stats, even after its big non-admission on Thursday that its methods for confirming virus-linked cases and deaths hadn’t been sufficiently inclusive. 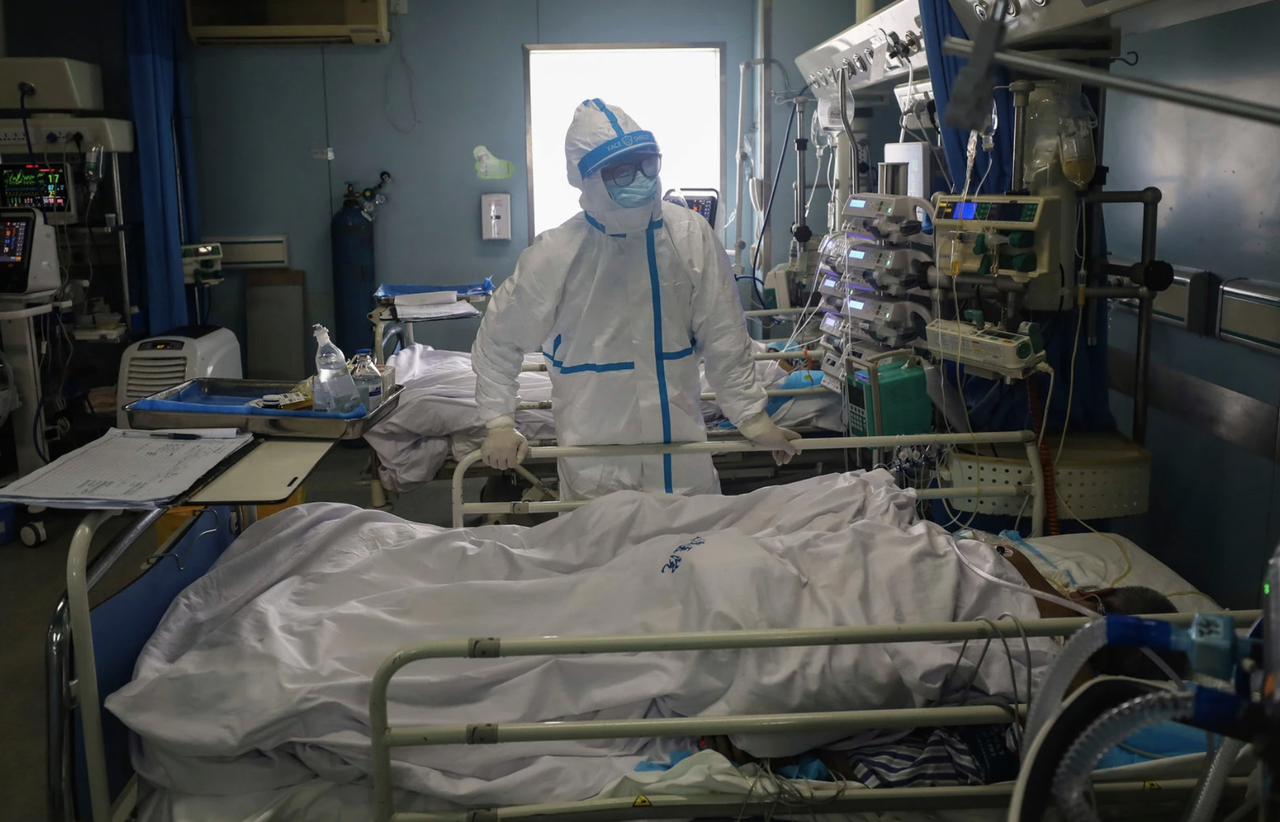 As we first pointed out yesterday, party officials said yesterday that the country would use “wartime measures” – a kind of public emergency declaration – to fight the virus, suggesting that the lockdowns will become even more widespread.