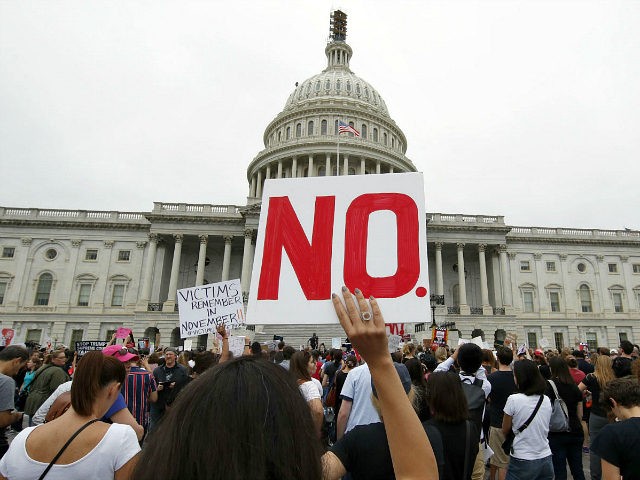 Within hours of the release of the questionable Times article, Demand Justice not only launched a social media campaign but used the piece to push their October 6 event to “protest this corrupt Supreme Court and demand an investigation of Kavanaugh.”

The event is being organized with the radical Soros-funded Women’s March and CPD Action, whose sister group, Center for Popular Democracy, is also funded by Soros.

Within less than 24 hours, Demand Justice used the Times piece to further promote their rally and renew the event’s aim “to #ImpeachKavanaugh.”

Together with the Women’s March and CPD Action, Demand Justice went on a public relations offensive against Kavanaugh utilizing the latest accusation storyline to comment in the news media.

“This new report corroborates the allegations made by Debbie Ramirez and proves the FBI investigation conducted last year was a sham from the start,” the three groups said in a statement widely picked up by the news media.

“At this point, an impeachment inquiry in the House is the only appropriate way to conduct the fact-finding that Senate Republicans refused to conduct.”

Demand Justice has since blasted out emails and other messages to supporters urging Kavanaugh’s impeachment, based in part on the Times piece.

Demand Justice has been at the forefront of anti-Kavanaugh activism. Even before President Donald Trump first announced Kavanaugh as his official nominee, Demand Justice committed to spending about $5 million to oppose any eventual Trump nominee for the Supreme Court. The organization seeks to raise $10 million in its first year.

Breitbart News reported that within less than one hour of Trump’s announcement that Kavanough was his nominee, Demand Justice had already put up the website stopkavanaugh.com, exclaiming: “We need to demand that the Senate defeat the Brett Kavanaugh nomination.”

The news media has routinely produced articles on Demand Justice protesters, with many pieces failing to inform readers that this is not a grassroots group but an organization spawned by professional organizers and tied to deep leftist funding.

Brian Fallon, the head of Demand Justice, served as press secretary for Clinton’s 2016 presidential campaign. The group’s digital team is headed by Gabrielle McCaffrey, who was a digital organizer for Clinton’s campaign.

In an interview with the New York Times, Fallon would not comment on the source of the group’s financing, but the newspaper noted that he was recently a featured speaker at the conference of the Democracy Alliance, a grouping of progressive donors.

Demand Justice is fiscally sponsored by the Sixteen Thirty Fund, one of four nonprofits run by Arabella Advisors.

The Capital Research Center’s expose documented that from 2013-2017 alone, Arabella’s four nonprofits spent a combined $1.16 billion with the aim of advancing “the political policies desired by wealthy left-wing interests through hundreds of ‘front’ groups.”

“And those interests pay well: the network’s revenues grew by an incredible 392 percent over that same period,” the report related.

“Together, these groups form an interlocking network of ‘dark money’ pop-up groups and other fiscally sponsored projects, all afloat in a half-billion-dollar ocean of cash,” states the report. “The real puppeteer, though, is Arabella Advisors, which has managed to largely conceal its role in coordinating so much of the professional Left’s infrastructure under a mask of ‘philanthropy.’”

The New York Times piece at the center of Demand Justice’s latest anti-Kavanaugh push purports to have “uncovered” a “previously unreported story” about the Supreme Court justice. The article was adapted from a forthcoming anti-Kavanaugh book by the newspaper’s reporters Robin Pogrebin and Kate Kelly.

At first, the Times reported these standalone details:

A classmate, Max Stier, saw Mr. Kavanaugh with his pants down at a different drunken dorm party, where friends pushed his penis into the hand of a female student.

The Times issued a massive correction after it was reported that the newspaper had omitted the detail — included in the book — that the female accuser does not remember the incident.

An earlier version of this article, which was adapted from a forthcoming book, did not include one element of the book’s account regarding an assertion by a Yale classmate that friends of Brett Kavanaugh pushed his penis into the hand of a female student at a drunken dorm party. The book reports that the female student declined to be interviewed and friends say that she does not recall the incident. That information has been added to the article.

The allegation itself is “confusing” to National Review writer John McCormack, who opines:

If you take this confusing accusation in the essay at face value, it doesn’t even appear to be an allegation of assault against Kavanaugh.

Despite Demand Justice’s activism and amid the collapsing Times claim, Nadler does not seem to be in a rush to impeach Kavanaugh, saying, “We have our hands full with impeaching the president right now and that’s going to take up our limited resources and time for a while.”