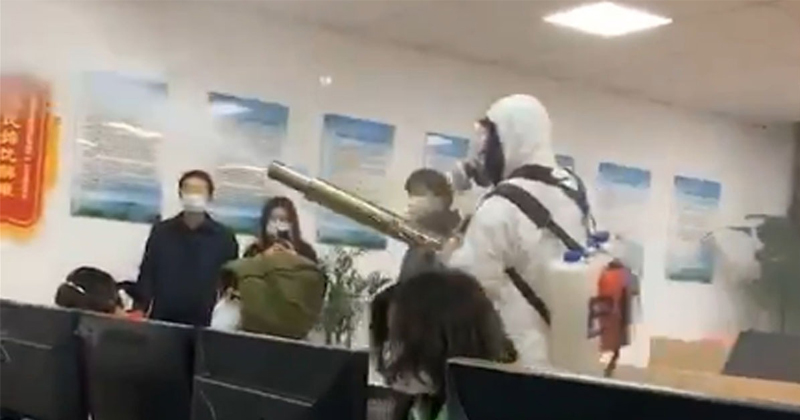 Video footage shows a man in full white hazmat gear marching into what appears to be a day trading office or call center in China, spraying everything with an aerosolized spray.

The employees, who appear to be mostly women, stay frozen in place, some ducking low and covering their heads as the suit-clad man barges unceremoniously through the office.

A male employee standing by a doorway, seemingly unaware, is caught off guard when the spray cannon-wielding juggernaut shoots him the face with the liquid blast.

Imagine you sit at work (just like guys at @RANsquawk) and then wtf.. have a nice day! pic.twitter.com/WXOs2EPI4U

The employee recoils and ducks away as the hazmat guy storms past into the next hallway, brushing another woman aside with the spray cannon.

The video surfaces as China moves to “disinfect” Wuhan with fleets of rolling trucks and platoons of men in hazmat suits wielding spray cannons like the one seen above.

Chinese government-owned newspaper The People’s Daily released video of the “disinfection” of the city of Wuhan featuring fire trucks and platoons of men in hazmat gear roaming the streets and spraying chemicals in the air.

The People’s Daily, which is the official newspaper of the Central Committee of the Communist Party of China, posted the video to Twitter.

“Full-front disinfection work has started in #Wuhan, an effort to contain the spread of #coronavirus,” the tweet caption read.

In the footage, fleets of fire trucks can be seen rolling down the streets of Wuhan spraying some type of chemicals, presumably disinfectant, into the air.

The flashing emergency lights and clouds of mist create an interesting scene on what appear to be otherwise deserted streets.
In another clip, men in hazmat suits run while rolling a wheeled liquid cannon down a street, covering storefronts in a white mist.

Another man-portable variant of the “disinfectant” cannon is seen carried by several members of the hazmat crew. This version has a set of twin gas canisters that are mounted to the back of the user.