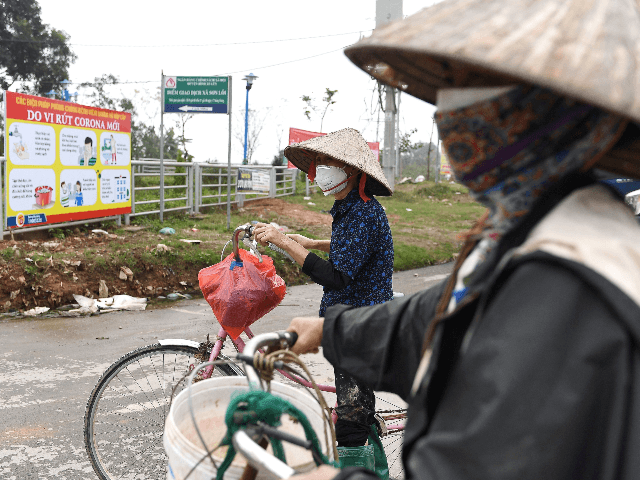 The first mass quarantine outside of China for the Wuhan coronavirus was reported in Vietnam on Thursday, with over 10,000 people living in farming communities near Hanoi locked down for 20 days after six virus infections were discovered.

AFP reported on Thursday that six villages in the Son Loi farming region, covering 2,500 acres about 25 miles from Hanoi, have been quarantined and surrounded by security checkpoints:

Health officials wearing protective suits sprayed disinfectant on vehicles. Police warned people wanting to enter the quarantined area that while they would be allowed in, they would not be able to leave.

The order comes after the health ministry reported that five people have been infected with the virus. It later announced a sixth case.

They all originated from a female worker who was sent to Wuhan in central China — where the virus originated — for training.

The disease then spread to her family and her neighbors, including a three-month-old baby.So far, only the female worker has fully recovered and been discharged from the hospital, according to updates from the ministry, while the others remain in a “stable” condition.

The disease was reportedly spread by celebrations of the Lunar New Year, a holiday known as Tet in Vietnam. Villagers said they have been told to avoid large gatherings for the duration of the crisis. Residents of the area said they are having trouble getting work in the vital construction industry because clients are suddenly reluctant to hire anyone from Son Loi.

Vietnam has reported a total of 16 coronavirus infections to date. Although the Vietnamese government banned air travel to China, the land border has proven difficult to lock down.

Vietnam rejected docking requests from two cruise ships this week due to coronavirus concerns. A local official explained that forbidding cruise passengers to disembark was “just a temporary solution to prevent the intrusion of diseases.”

The captain of one ship, the Norwegian Jade, shot back that Vietnamese port officials have been “unreasonable during this process” and refused to allow his ship to dock despite having no signs of illness aboard and no passengers who had visited China recently.

The Norwegian Jade ultimately headed for Thailand, which is believed to have given it permission to dock at the port of Laem Chabang.

Reuters noted that Vietnam is planning to quarantine hundreds of its own citizens at military camps and temporary facilities along the border as they return from China.