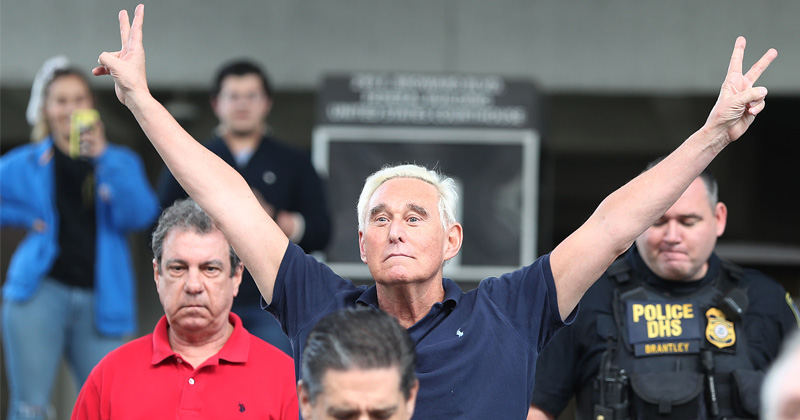 On Twitter, many pointed to the fact Stone’s sentence was harsh compared to violent criminals, including convicted pedophiles, despite Stone’s alleged offenses being victimless crimes.

Turning Point USA’s Charlie Kirk highlighted the biased forewoman on Stone’s jury, which should have resulted in a mistrial.

Others highlighted Stone’s supposed crimes were minor in comparison to the Deep State’s flagrant coup attempt.

Amid a lengthy statement, Judge Jackson defended the sentence claiming it was in line with the rule of law, and that Stone attempted to protect the president via a “cover-up.”

“The truth still exists, the truth still matters. Roger Stone’s insistence that it doesn’t … are a threat to our most fundamental institutions,” Jackson stated.

During a commencement speech at a Hope for Prisoners Graduation Ceremony in Las Vegas Thursday following the announcement of Stone’s sentence, President Trump told reporters he was watching the case closely and hinted at a pardon.

“I just want to let the fake news media know… that I’m gonna watch the process, I’m going to watch it very closely, and at some point I’ll make a determination, but Roger Stone and everybody needs to be treated fairly and this has not been a fair process,” the president stated.