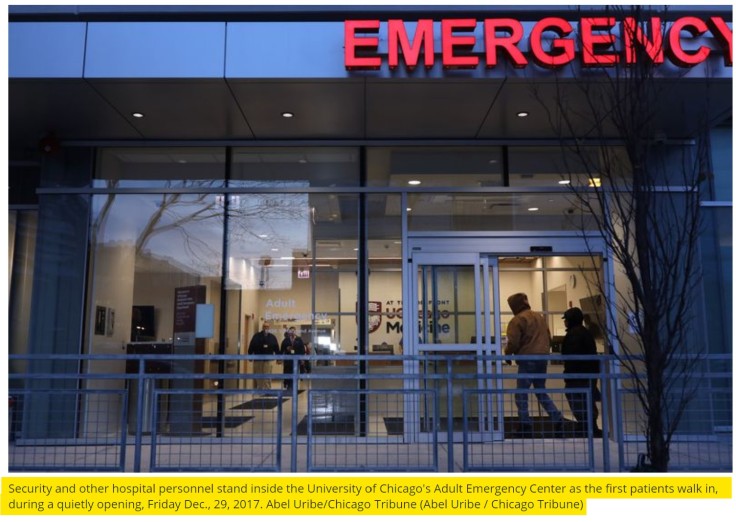 A person suspected of being infected with the coronavirus is being treated at the University of Chicago Medical Center, the fifth case to be reported in Illinois.

The hospital said it was waiting for lab test results to back up its suspicions. No details were released about the patient.

“We are awaiting lab tests to see whether this patient has COVID-19. Not sure how soon we will get back results,” hospital spokeswoman Lorna Wong wrote in an email Tuesday morning.

On Monday, the third and fourth cases in Illinois were reported: A husband and wife in their 70s both tested positive for coronavirus, but the results still need to be confirmed by the Centers for Disease Control and Prevention. The man was being treated at Northwest Community Hospital and his wife was under quarantine at home, officials said. Two other cases in Illinois have been confirmed by the CDC.

Wong said the hospital has been “preparing for this eventuality” since coronavirus first became a global public health threat in January.

“Senior hospital leadership and leaders from our infectious diseases and infection prevention teams, along with other expert clinicians, are working closely with local, state and federal health officials and continue to apply up to date recommended guidelines,” she said in an emailed statement.

“We have the utmost confidence in the dedicated and highly trained team composed of nurses, physicians and other health care professionals who are providing care for this patient,” it said.

Wong said the hospital wanted to release information as early as was possible, while awaiting official confirmation of the diagnosis from the Centers for Disease Control and Prevention.

“We will continue to update you as this situation develops, but wanted to immediately inform you,” she said.

On Monday, Arlington Heights School District 25 said two staffers and two students would be staying home as a result of possible exposure to a person who is related to a hospital worker who encountered a patient with coronavirus.

At least 15 states have reported confirmed cases of coronavirus. At least six people have died from the disease in Washington state.

The disease has hit at least 70 countries, with 90,000 cases and 3,100 deaths. The vast majority of cases and deaths have been in China. While the number of new cases recorded daily in that epicenter country has declined for weeks, the virus continues to spread fast in South Korea, Iran and Italy, prompting increased travel warnings and restrictions.

In Illinois as of Monday, 102 people are being or have already been tested for the virus, including the four people whose tests have come back positive and 79 people who tests have come back negative, with 19 tests still outstanding, according to state officials. A total of 286 people were being monitored by health officials as of Monday and state health officials are working to create guidelines for those who work with the most vulnerable patients, state officials have said. Several of the cases, and deaths, in Washington state have been among patients at a nursing facility.

The state has a hotline people can call with questions or to report suspected cases, 800-889-3931. They can call the Office of Consumer Health Insurance at 877-527-9431 about their insurance coverage.