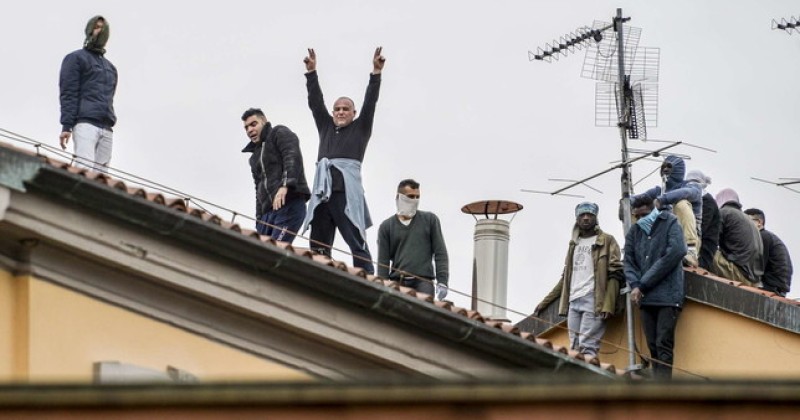 Unrest erupts at 27 different prisons across the country.

At least 20 inmates broke out of jail in Foggia as riots erupted at 27 different Italian prisons nationwide in response to the coronavirus outbreak.

“Incredible images of the escape from the prison in Foggia,” remarked Salvini. “While our law enforcement agencies do everything they can to protect us, anarchists and social centers incite detainees.”

According to reports, 50 inmates broke out but police managed to stop about 30 of them before telling shopkeepers to lock up as the rest escaped.

“Violent protests broke out Monday in 27 Italian prisons against coronavirus restrictions with many inmates asking for an amnesty due to the virus emergency,” reports ANSA.

Six prisoners were left dead after a separate riot at Pavia prison in Modena, with army soldiers having to surround the facility to prevent inmates descending on the town.

WATCH: Inmates at a prison in Milan set the jail on fire over Coronavirus Visiting Restrictions pic.twitter.com/v8ApdUX5XJ

The prisoners are rioting against restrictions that prevent relatives from visiting them as a result of the coronavirus outbreak, but many are obviously exploiting the situation in an effort to flee.

As we highlighted earlier, a leaked plan to quarantine northern Italy spectacularly backfired, sending thousands of people into a panic as they tried to flee, potentially making the spread of coronavirus even worse.

Italy now has a total confirmed 7,375 cases of coronavirus along with 366 deaths, more than any country outside of China.