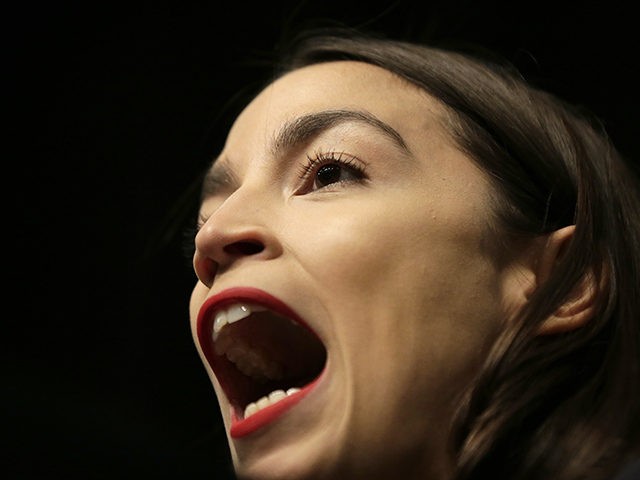 Rep. Alexandria Ocasio-Cortez (D-NY) on Monday evening ratcheted up her attacks on the Trump administration’s immigration policies, referring to President Donald Trump as a “fascist” operating “concentration camps” on the U.S.-Mexico border.

“That is exactly what they are. They are concentration camps,” Ocasio-Cortez said of migrant holding facilities during a Q&A live-streamed on Instagram. “The fact that concentrations camps are now an institutionalized practice in the Home of the Free is extraordinarily disturbing and we need to do something about it.”

The self-avowed Democratic-socialist then voiced her eagerness to connect with others “who are concerned enough with humanity to say that ‘never again’ means something.”

The expression “never again” is strongly associated with Holocaust remembrance.

During another part of the live-stream, the 29-year-old freshman lawmaker warned her followers that “we are losing to an authoritarian and fascist presidency.”

“The fact that concentration camps are now an institutionalized practice in the home of the free is extraordinarily disturbing, and we need to do something about it,” she added.

In November, Ocasio-Cortez faced blowback after comparing asylum seekers to Jews fleeing Nazi Germany during World War II, attempting to make the point that neither was a “crime.” “Asking to be considered a refugee and applying for status isn’t a crime,” the congresswoman wrote on Twitter. “It wasn’t for Jewish families fleeing Germany. It wasn’t for targeted families fleeing Rwanda. It wasn’t for communities fleeing war-torn Syria. And it isn’t for those fleeing violence in Central America.”

Ocasio-Cortez’s remarks came as President Trump vowed to deport millions of illegal aliens in a series of tweets.

Ahead of launching his 2020 re-election campaign, the president stated that U.S. Immigration and Customs Enforcement (ICE) will next week “begin the process of removing the millions of illegal aliens who have illicitly found their way into the United States.”

“They will be removed as fast as they come in,” he added.