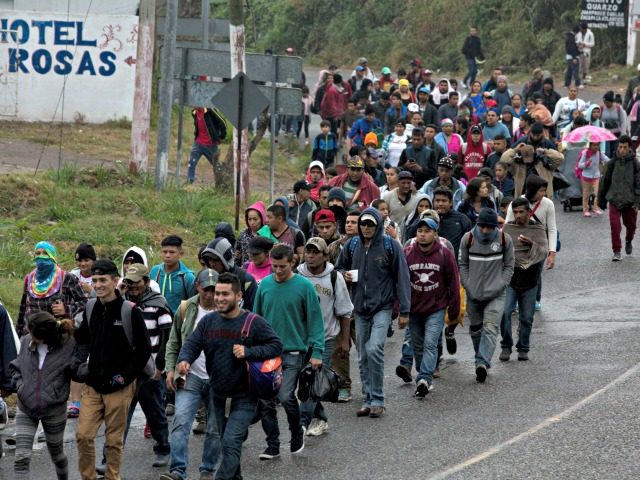 The tweet also said enforcement agencies will accelerate the repatriation of “millions” of illegal immigrants — even though Democrats and many establishment GOP legislators are blocking the legal reforms and funding needed to repatriate more than a small percentage of the more-than-11-million illegal migrants now living throughout the United States.

Trump’s deputies are also pushing Mexico to sign a safe third country deal if Mexico cannot sharply reduce the huge migration by Latin Americans through its own territory to the United States.

Pro-migration advocates denounced the Guatemalan “safe third country” plan — even though their policies are allowing up to 1 million Central American migrants to flood into Americans’ workplaces, neighborhoods, and classrooms. That wave of migrants — which now includes a growing number of Africans and Indians — is good for university class professionals, investors, and for business groups, but it hurts ordinary Americans by lowering wages, raising rents and importing more chaotic diversity.

“I don’t know what this is about,” said a tweet from Todd Schulte, director of a pro-migration, cheap-labor lobbying group set by West Coast investors, including Mark Zuckerberg. He continued:

But ICE does NOT have the ability/resources to “begin the process of removing millions” of people. People should be responsible when sharing this & note that, especially in these tough times. On “Safe Third Country”, its designed to end all asylum.

However, the plan for a safe third country deal with Guatemala has hit a major obstacle on June 13, according to the Voice of America news service:

The State Department readout on the first day of talks suggested that there had been a “complete misinterpretation” by the Guatemalans regarding the draft agreement.

According to the readout, Guatemalan ministers reiterated “political will to reach an asylum burden sharing agreement,” but raised “legal and constitutional issues” that would make a safe third country agreement “a challenging lift.”

Rather than wrapping up the talks before Guatemala’s scheduled national election on Sunday, the talks are likely to continue into next week.

But according to the internal readout, the draft White House agreement was being viewed differently by the two sides.

“While [the Guatemalans] are supportive of taking returns from the United States, they did not realize they would be obligated to process the asylum claims of the returned individuals,” String wrote.

According to String, the Guatemalan government thought the agreement would be “analogous to Mexican Migrant Protection Protocols (MPP),” a system currently in place between Mexico and the U.S. requiring migrants seeking asylum in the U.S. to wait in Mexico pending the adjudication of their claims.

The “Remain in Mexico” program is a step short of “safe third country.”

It allows the U.S. officials to send large numbers of migrants back into Mexico until U.S. officials are ready to bring them in for their asylum hearing before a judge. That policy prevents the migrants from getting U.S. jobs — and so prevents the cartels from getting paid for delivering migrants to the U.S. border. Only about one-in-six migrants have been awarded asylum during the last few years, partly because the vast majority are economic migrants who would drive down wages for Americans.

Immigration by the Numbers

The government also prints out more than one million work permits for foreigners, tolerates about eight million illegal workers, and does not punish companies for employing the hundreds of thousands of illegal migrants who sneak across the border or overstay their legal visas each year.

This policy of inflating the labor supply boosts economic growth for investors because it ensures that employers do not have to compete for American workers by offering higher wages and better working conditions.

Flooding the market with cheap, foreign, white-collar graduates and blue-collar labor also shifts enormous wealth from young employees towards older investors, even as it also widens wealth gaps, reduces high-tech investment, increases state and local tax burdens, and hurts children’s schools and college educations. It also pushes Americans away from high-tech careers and sidelines millions of marginalized Americans, including many who are now struggling with fentanyl addictions. The labor policy also moves business investment and wealth from the Heartland to the coastal cities, explodes rents and housing costs, shrivels real estate values in the Midwest, and rewards investors for creating low-tech, labor-intensive workplaces.