Two-time losers Hillary Clinton and Mitt Romney are rumored to be mulling presidential runs in 2020, despite repeated and resounding rejections from the voting public. Why won’t they go away, and is this a sign of a deeper crisis?

It’s not just Clinton and Romney. Democratic frontrunner Joe Biden himself is a two-time loser convinced that third time’s the charm. Even Democratic Socialist Bernie Sanders, whose policy ideas are relatively new, even if he isn’t, has been in politics most of his life. DC has become the east coast version of Hollywood, churning through remake after remake as audiences and interest dwindle, fueled by a zombie economy of donors utterly disconnected from the real world.

Clinton has been ubiquitous on TV for the past few weeks, making the rounds ostensibly to promote a book she co-wrote with her daughter. Yet every single conversation inevitably swings back to 2016, how she was robbed of her rightful place in the Oval Office, and how President Donald Trump is an “illegitimate” leader who “knows” he stole the election.

When Trump opted to pull troops out of northern Syria on Monday, finally fulfilling a campaign promise he’d made in part to counter her warmongering, Clinton was quick to slam the decision as a “sickening betrayal.”

Her tweet – which seemingly wouldn’t hold much significance now that she’s (supposedly) retired from politics – nevertheless rated entire articles in the Hill and other publications. 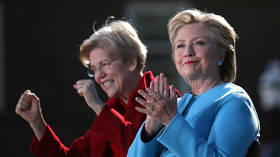 Her impeachment cheerleading could be motivated by the possibility that when the Ukrainegate cards are laid out on the table, frontrunner Biden could easily go down in flames, leaving the field wide open for her to step in – especially now that her 2016 rival, Sanders, has been laid low with a heart attack.

Biden speaks for the Democratic establishment when he promises “nothing would fundamentally change” if he won. His constant name-dropping of Obama – when he can remember his former boss’ name that is – is a naked appeal to amnesiac nostalgia, the Democratic Party platform’s declaration that everything bad in the country has happened because of Trump.

This is not merely a Democratic Party problem, however. Mitt Romney, the Utah Senator who failed to secure his party’s nomination for president in 2008 and failed to beat Barack Obama in 2012, has been complaining to anyone who will listen that Trump’s actions on Ukraine are “wrong and appalling.”

He too leapt onto Twitter following Trump’s announcement of the Syria pullout, calling “the president’s decision to abandon our Kurd allies in the face of an assault by Turkey…a betrayal.” And he too suddenly rates entire articles based on a single tweet.

Romney is testing the waters for a 2020 run, calling his donors to see who’ll bite, according to the self-described “Republican political operative” Jack Posobiec. Trump Communications Director turned sophomoric insult machine Anthony Scaramucci has already started cheering Romney on, while never-Trump neocon William Kristol’s new outlet The Bulwark posted a fawning paean to the former Massachusetts governor on Monday, just two days after Kristol himself tweeted a poll that showed Trump nearly twice as “respected” as Romney. Perhaps hoping to change those numbers, the warmonger’s journal gushed that Romney has “stepped up at the decisive moments” and “seems focused on the verdict of history.”

American politics has seemingly fallen prey to the same sickness that plagues Hollywood, where nearly every film seems to be a remake or spinoff of something that came before. Producers argue audiences embrace the familiar; a recent survey found that isn’t the case – that 91 percent of remakes experience steep drop-offs in approval compared to the originals. Movie theater attendance dropped to a 19-year low in 2017. Audiences are sick of being fed pre-chewed entertainment and “woke” takes on beloved classics.

And it’s no different in politics – 42 percent of Americans identified as independents in 2017, suggesting that nearly half the country is utterly disgusted with a two-party system that doesn’t even pretend to represent them, instead pandering to an idealized “middle class” their policies have helped kill. Nevertheless, hoary old has-beens are the only candidates with enough money to make it onto the ballot. As a result, voter turnout plunged to a 20-year low in 2016, with just 55 percent of voting-age citizens casting ballots.

Neither party has learned its lesson from 2016, which saw a dynamic – if, to some, off-putting – character sweep through first the primaries and then the general election by positioning himself as the opposite of the “swamp creatures” that have made a career out of looking busy while ensuring the status quo doesn’t move. Anyone with a flicker of originality is sidelined (Tulsi Gabbard) or mocked (Marianne Williamson). Perhaps both parties really do want four more years of Trump – it gives them an excuse to sit on the sidelines and complain without having to do any governing.