Hillary Clinton is still peddling election-related conspiracy theories, this time hinting that 2020 Democratic contender Tulsi Gabbard is being ‘groomed’ to split the Democratic vote as a third party candidate, thus handing the election to President Trump.

Speaking with former Obama 2008 campaign manager David Plouffe on his podcast, “Campaign HQ with David Plouffe,” Clinton said – without mentioning Gabbard by name: “I’m not making any predictions but I think they’ve got their eye on somebody who is currently in the Democratic primary and are grooming her to be the third-party candidate. She’s the favorite of the Russians.”

Of course, that’s “assuming Jill Stein will give it up – because she’s also a Russian asset,” Clinton continued. 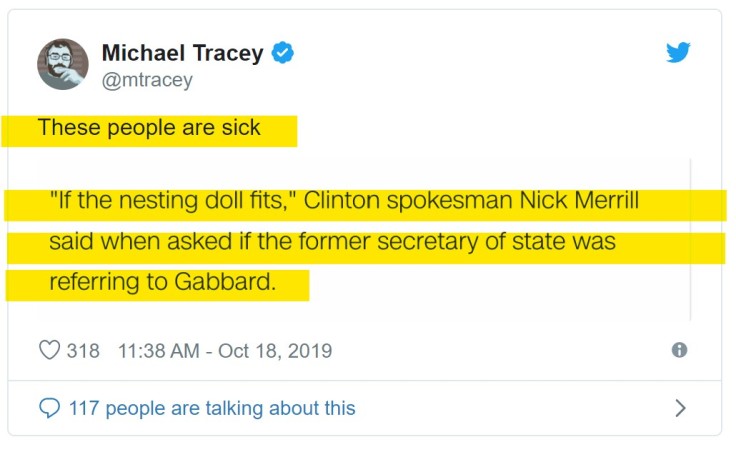 Earlier in the interview, Clinton hinted that the Trump 2020 campaign is still in “contact with the Russians,” and that “we have to assume that since it worked for them, why would they quit?”

“Donald Trump is Vladimir Putin’s dream,” Clinton added. “I don’t know what Putin has on him – whether its both personal and financial, I assume it is. But more than that, there’s this bizarre adulation Trump has for dictators.”

Clinton also insisted that Russia “did affect the outcome of the election” in 2016, despite the DOJ concluding otherwise.