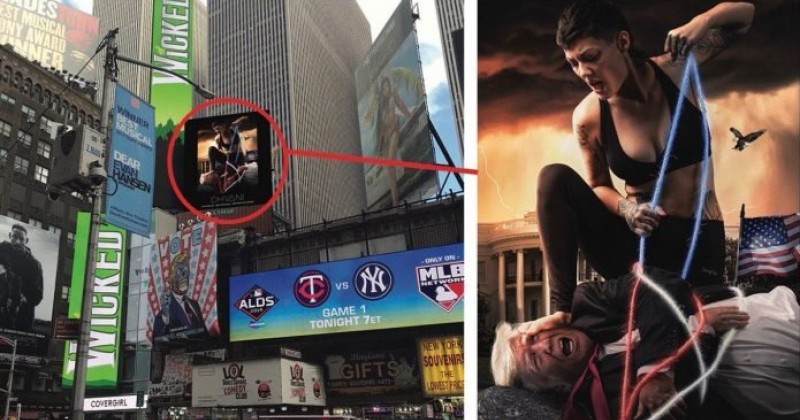 So much for the tolerant left!

A billboard being displayed in Times Square, New York shows President Trump hogtied and being tortured as part of yet another ‘woke’ advertising campaign.

The image, which shows Trump being held down by an angry female Marine Corps veteran, is a commercial for athletic clothing company DHVANI.

On the company’s Instagram page, DHVANI claims the image is a backlash to Trump having 26 credible accusations of sexual assault or rape against him (none of which are actually credible), as well as him having “no respect for the rule of law.”

“SICK: The president receives daily death threats,” tweeted Charlie Kirk. “Secret Service had to arrest an armed man outside his rally. And this is what is plastered in Times Square—a literal depiction of violence against him.”

Another image on the company’s Instagram page shows Trump on the toilet with his pants down having his phone swiped from him by a brown woman in skimpy camo gear.

The company has said it will donate a portion of profits from sales of its clothing to help fund abortions.

The left’s secret desire to inflict violence against Trump often spills out publicly.

As we reported earlier, actor Tom Arnold tweeted what amounted to a veiled assassination threat before Trump’s appearance in Dallas, Texas.