The Baltimore City Fraternal Order of Police Lodge 3 posted a video it says was recently taken from social media showing a gang of teenagers and young men wielding handguns as they rapped and danced for a video recording in the street of a crime-ridden Baltimore neighborhood. One rapper is seen flashing a spread of money including hundred dollar bills. The FOP complained that this is what they have to deal with in a city so poorly run it can’t even control “squeegee kids” harassing motorists. 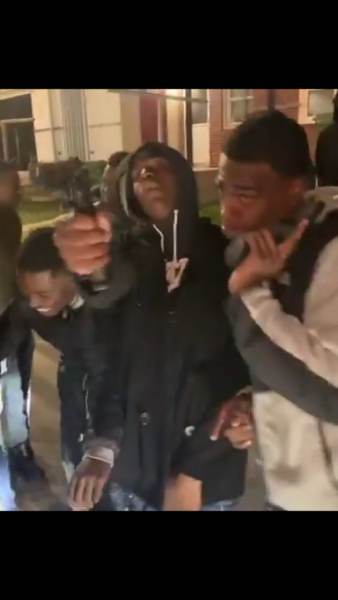 “This was posted to social media just days before a recent murder in the same O’Donnell Heights neighborhood. This is what our Cops are facing under the current administration. They can’t even find a way to resolve the squeegee issue let alone this! #CityinCrisis”

This was posted to social media just days before a recent murder in the same O'Donnell Heights neighborhood. This is what our Cops are facing under the current administration. They can't even find a way to resolve the squeegee issue let alone this! #CityinCrisis pic.twitter.com/bK2yxV9X45

The people in the video appear to be all black with the exception of a lone young white male seen on the far edge of the gang toward the end of the video clip.

Excerpt from the Baltimore Sun report on the recent murder in O’Donnell Heights:

A 32-year-old man was shot to death Sunday afternoon in O’Donnell Heights in Southeast Baltimore, Baltimore Police wrote on Facebook on Sunday night.

Southeast District officers responded to a report of a shooting at the 6100 block of Boston St. at approximately 4:15 p.m. They located a man who was suffering from gunshot wounds to the body. The victim was transported to Johns Hopkins Hospital at Bayview where, police wrote, he was pronounced dead a short time later…

The “squeegee kids” problem the FOP mentioned was detailed in a local TV report earlier this year:

Excerpt from the Wikipedia entry for O’Donnell Heights:

O’Donnell Heights is a neighborhood named for a public housing development in the far southeastern part of the city of Baltimore, Maryland, United States. It is located south and east of Interstate 95, just west of the border with Baltimore County, and north of the St. Helena neighborhood.

The community was built to house factory workers during World War II. Today operated by the Housing Authority of Baltimore City, the original 900 unit development was modernized in 1983. The neighborhood, which also contains privately owned and rented rowhouses, is separated from Highlandtown by highways, cemeteries, and industrial areas. It is in close proximity to the Point Breeze Industrial Park and Johns Hopkins Bayview Medical Center.

Baltimore and Maryland have some of the strictest gun control laws in the nation. Excerpt from Wikipedia on Maryland gun laws relevant to the video:

Carrying a handgun, whether openly or concealed, is prohibited unless one has a permit to carry a handgun or is on their own property or their own place of business. The Maryland State Police may issue a permit to carry a handgun at their discretion and based on an investigation. In practice, very few applicants are granted carry permits, and approval typically requires the applicant to provide proof of a clear and imminent threat on his or her life…