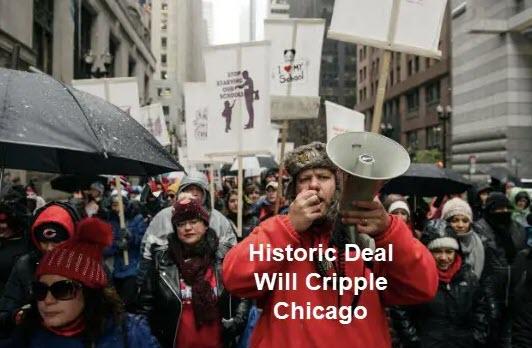 Authored by Mike Shedlock via MishTalk,

Chicago Mayor Lori Lightfoot and the Teachers Union reached agreement on a deal sure to send Chicago over the cliff.

The Wall Street Journal Editorial Board blasts Chicago Mayor Lori Lightfoot for her deal with the Chicago Teachers Union (CTU). The deal will further wreak havoc on the already insolvent school system.

Who will be hurt most?

The WSJ answers the question this way: Union Routs Students in Chicago.

Get the Hell Out

The WSJ commented “Michelle Obama the other day complained that white people were leaving the city to escape minorities who are moving in. No, they’re fleeing Chicago’s high taxes and lousy schools—and so are minorities.”

You can kiss those positive and stable outlooks goodbye. The system is insolvent and this contract will further weaken the outlook.

S&P already has CPS bonds in the “highly” speculative area, five steps into its junk ratings.

A Chicago Teacher’s Pension is based on your years of service and a pension percentage (up to 75%), multiplied by your final average salary. Their union notes “There are ways to increase these factors to enhance your pension or meet eligibility requirements.”

Wirepoints asks Chicago Teachers Strike: Why is No One Talking About Pensions?

The average retired CPS teacher already receives a pension of nearly $55,000 a year, according to a 2019 FOIA request to the Chicago Teachers’ Pension Fund.

However, looking at the pension of an average teacher far understates the true size of CPS pensions. The “average” benefit includes teachers who only worked a few years for CPS, which brings down the average.

To get a more accurate picture of what pensions are really worth, look at career teachers. Over half of all currently retired CPS teachers worked 30 years or more. On average, they receive a $72,000 annual pension and began drawing benefits at age 61.

In comparison, the average annual Social Security payment in Chicago is just $16,000 and the maximum benefit for someone retiring at age 62 is $26,500.

The average career CPS pension will grow by 3 percent, compounded annually, due to the COLA benefits teachers get. That will double a teacher’s annual benefit to over $140,000 in 25 years.

Those projections were based on the proposed contract. The CTU held out for even more benefits and got them.

The Chicago Tribune notes that the end of 2018, City Hall’s pension funds had only 23% of what they should have.

By 2023, Lightfoot must find an additional $989 million a year for pensions, according to the Tribune’s Hal Dardick and Juan Perez Jr. Thank you, former mayors and aldermen, for promising more pension benefits than Chicagoans could afford.

That one is easy.

Get the Hell Out

On October 5, I commented Escape Illinois: Get The Hell Out Now, We Are

Goodbye Illinois. Hello Utah. See my reasons for Utah above.

If you can’t get out of Illinois, do the second best thing, Get the Hell Out of Chicago.

By the way, Chicago is not “headed” for insolvency, it’s already there, but it is just not recognized yet.