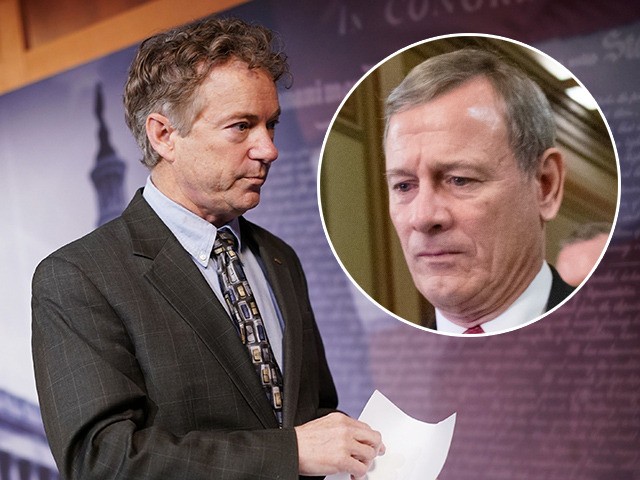 To the Manager Schiff and counsel for the President:

Manager Schiff and Counsel for the President, are you aware that House Intelligence Committee staffer Shawn Misko had a close relationship with Eric Ciaramella when at the National Security Council together, and are you aware and how do you respond to reports that Ciaramella and Misko may have worked together to plot impeaching the President before there were formal House impeachment proceedings?”

In the question, Paul does not identify Eric Ciaramella, a CIA analyst who has been widely reported to be the “whistleblower” whose complaint launched the Democrats’ impeachment proceedings, as the “whistleblower.”

But Roberts has now multiple times throughout the trial censored any mention of Ciaramella’s name, despite his direct involvement in these matters.

Paul also tweeted this after the fact:

Recent investigative reports from RealClearPolitics have indicated that Misko, now a Schiff staffer on the House Intelligence Committee, and Ciaramella have a close relationship and were overheard discussing efforts to try to plot against President Trump.

Roberts has not offered any legal argument for hiding the individual’s identity. As Breitbart News has repeatedly explained, the only statutory protection for people who submit whistleblower complaints is that the intelligence community inspector general (ICIG) cannot name him or her publicly:

Even left-wing mainstream media outlets—CNN, the New York Times, National Public Radio (NPR), and Reuters — determined that, certainly, no law prohibits President Donald Trump or members of Congress from disclosing the name of the leaker who sparked the impeachment inquiry.

Even Rep. Jackie Speier (D-CA) confirmed this fact by reading a passage from the Washington Post into the record of the House impeachment hearings which states: “That appears to be the lone statutory restriction on disclosing a whistleblower’s identity, applicable only to the inspector general’s office. We found no court rulings on whether whistleblowers have a right to anonymity under the ICWPA or related statutes.”

Further, Breitbart’s Senior Editor-at-Large Joel Pollak has written President Trump has a right under the Sixth Amendment to confront his accuser at a trial where he is the defendant. He explains: “even if the Chief Justice were to rule that it does not, the Senate can overrule him. If the president wants to call the whistleblower to testify, he will likely have to do so.”

In October, RealClearInvestigations published an individual’s name whom author Paul Sperry believes is likely the “whistleblower” — Eric Ciaramella, an analyst at the Central Intelligence Agency (CIA), who worked for the National Security Council under the Obama and Trump administrations.