The Lombardy region has 39 coronavirus cases with another 12 cases in the Veneto, regional officials said in a press conference Saturday in Milan. Most of the cases are in the Codogno area, 60 kilometers (37 miles) from Milan. A woman who was found dead in her home subsequently tested positive, the health secretary said. Earlier, three tourists in Rome were diagnosed with the virus.

When WHO Director-General Dr. Tedros was asked on Thursday whether the COVID-19 virus was at a tipping point, he replied that the window to stop the outbreak from growing exponentially worse was rapidly closing.

Though by Friday night, it certainly seemed like that window had slammed shut. In South Korea, cases went exponential, soaring by 70% in one day.

Overnight, the country reported another rash of confirmed cases, bringing the total to 433, with 352 in Daegu, presumably members of the cult-like church where a ‘super-spreader’ worshipped. That marks an eight-fold increase in cases in just four days for South Korea, as the AP reported.

SK also reported its third death, a man in his 40s who was found dead in his apartment and posthumously tested.

South Korean health officials warned they could soon see a rash of deaths as several patients are in serious condition. Virus patients with signs of pneumonia or other serious conditions at the Cheongdo hospital were transferred elsewhere as 17 of them are in critical condition, according to SK Vice Health Minister Kim Gang-lip told reporters.

The country has followed China in imposing quarantines (everyone is too terrified to go outside anyway) and they’re hoping to prevent a national outbreak, despite a few cases in Seoul that weren’t immediately traceable to an obvious source, which is sort of discouraging.

“Although we are beginning to see some more cases nationwide, infections are still sporadic outside of the special management zone of Daegu and North Gyeongsang Province,” Kim said during a briefing. He called for maintaining strong border controls to prevent infections from China and elsewhere from entering South Korea.

In Italy, a seemingly minor outbreak went exponential. By day’s end, Italian health authorities had confirmed their first virus-related fatality, and 12 towns in Lombardy were under strict quarantine orders with residents huddling terrified inside their homes, a tableau that has become all too familiar by now. Another fatality followed overnight, as a couple more towns joined in the lockdown. This marked Italy as the first European country to see its own nationals succumb to the virus, according to Euronews. 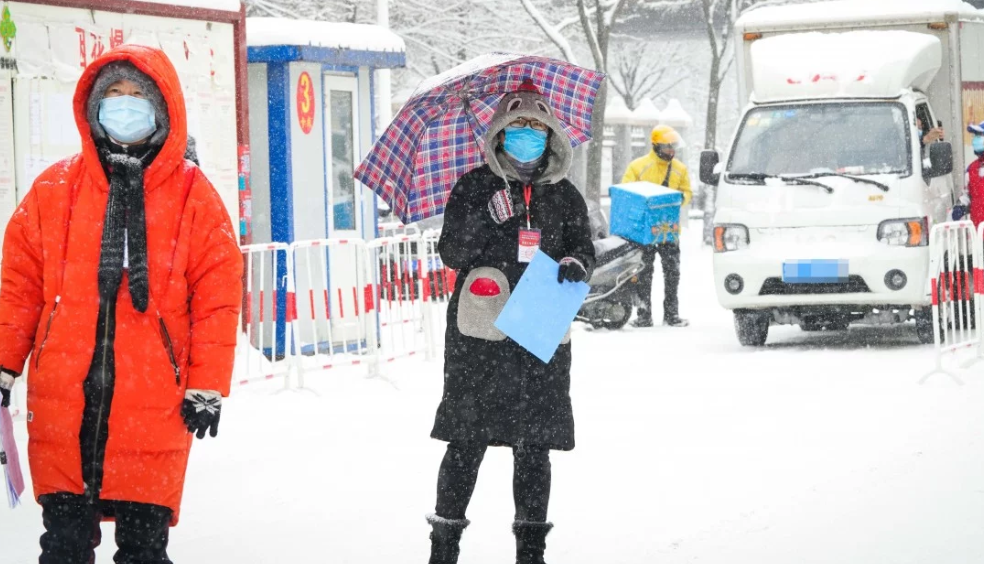 Across Italy, there are 32 cases in Codogno, Lombardy, and seven in Veneto, according to the AFP and Sky Italia television. Many of the new cases represented the first infections in Italy acquired through secondary contagion.

In Iran, 10 more cases, and one more death, were recorded overnight. That brings the total number of confirmed cases to 28, including cases in Qom and Tehran. So far, five Iranians have died.

As we await more information out of China, CNBC’s Eunice Yoon reports that the team would hold a press briefing on Monday at 6 am ET.

Meanwhile, as we noted yesterday, the team has arrived in Wuhan, where it’s gathering information and observing the situation on the ground. 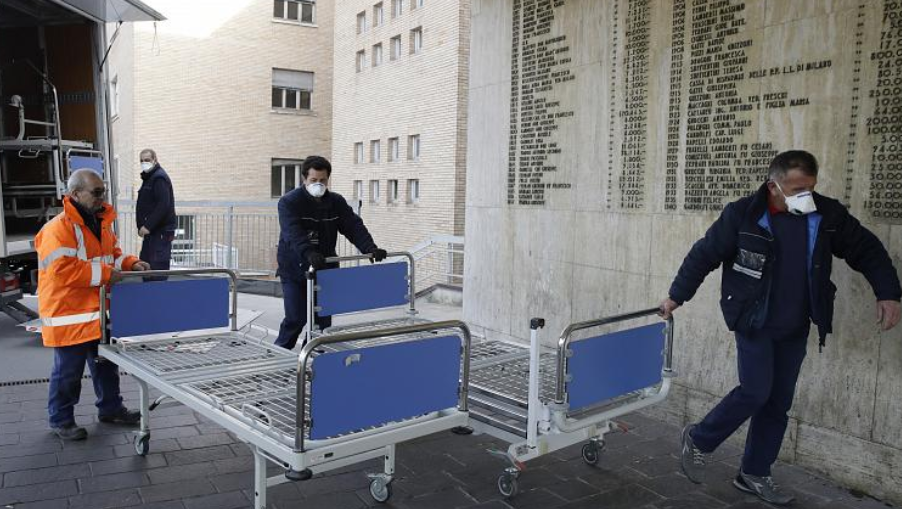 The team has already been to three Chinese provinces, Beijing, Sichuan and Guangdong, but are only now just visiting the city at the heart of the outbreak. Dr. Tedros confirmed the trip during public comments on Saturday, where he once again shared some familiar words.

“We have to take advantage of the window of opportunity we have, to attack the virus outbreak with a sense of urgency,” Dr. Tedros told the leaders, who had gathered for an emergency meeting on the response to the coronavirus in the continent.

President Xi said Saturday that the situation in Wuhan remains ‘grim and complex’ – which means the WHO team should be in for an eye-opening experience.

As of Saturday morning in the US, 1,200 cases of COVID-19 have been diagnosed outside China. More than 200 cases have been confirmed in South Korea, more than 30 in Italy, roughly a dozen in Iran, and one in Egypt, the first to be confirmed in Africa. China has reported over 76,000 cases, including over 2,300 deaths. 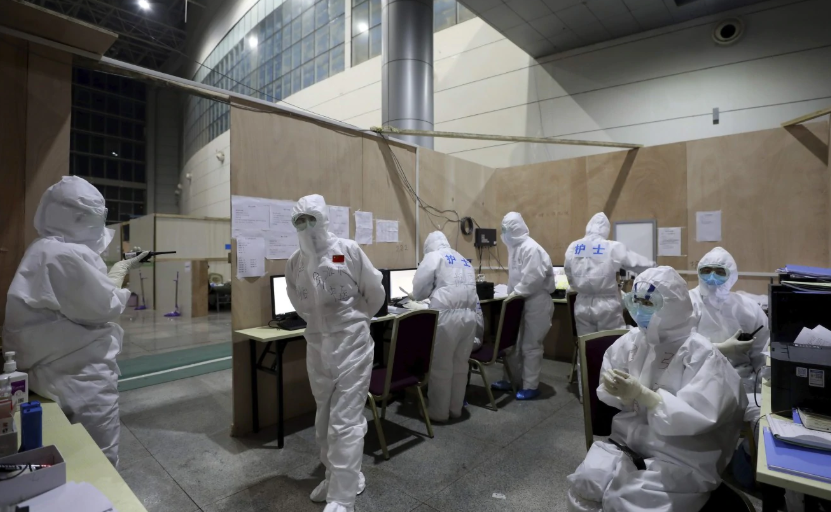 Confirmed cases in Japan rose to 121 on Saturday, having more than tripled in a week.

Meanwhile, the Washington Post reports that health officials and the cruise line are continuing to test crew members aboard the Diamond Princess. So far, 74 crew have been confirmed to have the virus, but they have been included in the toll already. 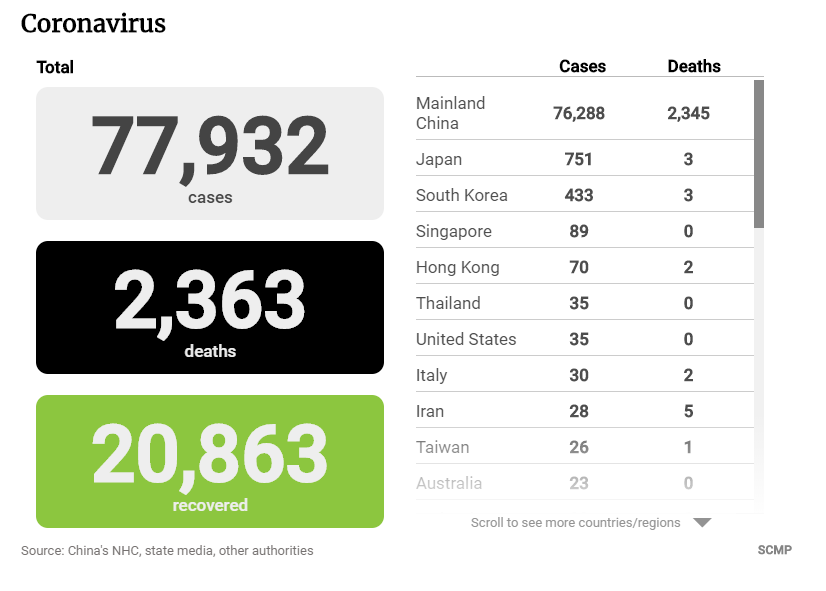 So far, China has reported only 397 new cases Saturday, as the rate of increase continued to decline, but another 109 have died. And even the Washington Post acknowledges that there is a “great deal of skepticism” about China’s numbers, according to a new case study seen by Reuters.

Cases where patients didn’t show signs of infection for longer than two weeks have prompted some epidemiologists to suggest a 27 day quarantine period instead of just a 14 day. Also on Saturday scientists in China revealed that they had discovered a strain of the virus in a patient’s urine, raising new and uncomfortable questions about the virus’s ability to spread through sewer systems.

There have also been several new indications that the virus’s incubation period might be longer than the 14 days currently believed. A woman in Wuhan with no symptoms infected five relatives without every showing signs of infection.

In the US, health officials are scrambling to contain the fallout from the evacuation of 300 Americans from the ‘Diamond Princess’. It appears that the decision to transport 14 infected passengers along with the rest of the group was a disaster. Dozens of others appear to have been infected either during the trip, or shortly before.

But in San Diego, officials announced that they’re monitoring some 200 cases, none of which had anything to do with the ship.

After confirmed US cases more than doubled to 34 on Friday, officials in San Diego on Saturday confirmed that more than 200 people are currently being monitored over virus concerns, according to ABC News 10.

Officials said everyone being monitored had either come in contact with one of the three confirmed cases, or others under suspicion. Health officials didn’t exactly offer specific details.

They’re among more than 300 people who have been, or are being, ‘monitored’ by the county.

The 204 people under county supervision include those deemed at risk of having been exposed to the virus due to close contact with confirmed cases or because of travel to China in the past 14 days, the county said.

Those individuals are monitoring their health under the supervision of county health officials.

So far, 338 people in all have been monitored by the county, with 134 people completing their time under supervision.

Health officials say the CDC is conducting screening for those landing at one of 11 U.S. airports from China. From there, if a patient shows no symptoms they are self-quarantined at home for self-monitoring with public health supervision.

Keep in mind: These individuals aren’t being held in isolation or a mandatory quarantine. Instead, they’ve been asked to self-quarantine, and immediately report any suspicious symptoms.

San Diego has had two confirmed cases of coronavirus, or COVID-19, among the evacuees who were flown out of Wuhan a few weeks ago. One patient has since recovered from the virus and has been released. The second patient is still receiving care. A third patient, reportedly a child, is still awaiting test results, but has been said to be showing symptoms.

When they extended a coronavirus-related emergency declaration for another 30 days, officials said there were no signs the virus was spreading around San Diego. But it never hurts to be cautious.

Before we go, we wanted to remind readers of a chart we first shared a couple of days ago:

This is a terrifying chart pic.twitter.com/i9kGPzC1BO