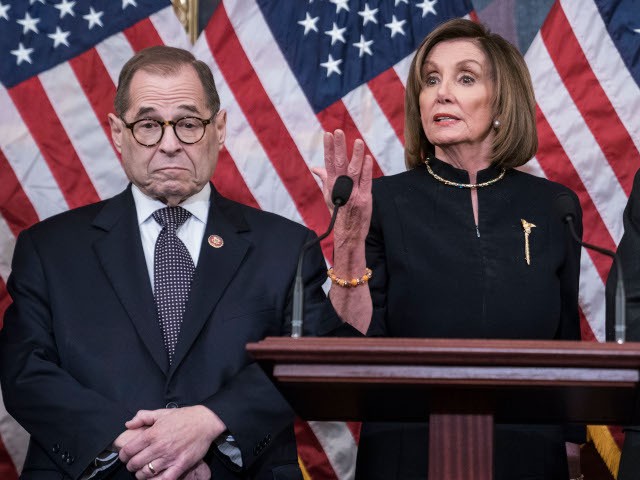 House Judiciary Chairman Jerry Nadler (D-NY) on Tuesday said Democrats should flee Washington, D.C. as coronavirus continues to spread across the United States — A suggestion which was immediately shut down by House Speaker Nancy Pelosi (D-CA), according to a report.

Nadler made the remark in a closed-door caucus meeting on the deadly illness.

“We are the captains of the ship. We are the last to leave,” Pelosi responded, echoing a comment by Rep. Mikie Sherrill (D-NJ) moments earlier, The Hill reports.

Concerns about a possible coronavirus outbreak in the Capitol have grown as several lawmakers have self-quarantined after coming into contact with infected individuals.

Five Republicans, including President Donald Trump’s incoming chief of staff, Rep. Mark Meadows (R-NC), have quarantined themselves are coming into contact with someone with the virus at the recent Conservative Political Action Conference (CPAC).

Rep. Matt Gaetz (R-FL), who flew with President Trump aboard Air Force One on Monday, announced he would be taking two weeks of self-imposed isolation after coming into contact at CPAC with the person diagnosed with the virus.

News of the CPAC infection came days after the American Israel Public Affairs Committee (AIPAC) announced attendees to its policy conference last week may have come into contact with a person infected with the virus.

Since the coronavirus outbreak began in China in December, there have been more than 4,000 deaths and 113,000 cases worldwide, including 21 fatalities in the United States and more than 500 cases of the disease.

In a statement on Sunday, ACU said the Maryland Department of Health has screened thousands of employees at the resort, conference center and hotel where the conference was held and “not a single person has reported any unusual illness.”

“The Dept. of Health is not restricting the movement or interactions with others of those hotel employees,” it said in a statement, adding it is encouraging them to take their temperature twice daily and pay attention for symptoms.

The ACU said the infected attendee was receiving medical care in New Jersey and was quarantined.

In a separate situation, Rep. Julia Brownley (D-CA) said she has self-isolated herself after having come into contact last week in Washington, D.C., with a person who has tested positive for the virus.