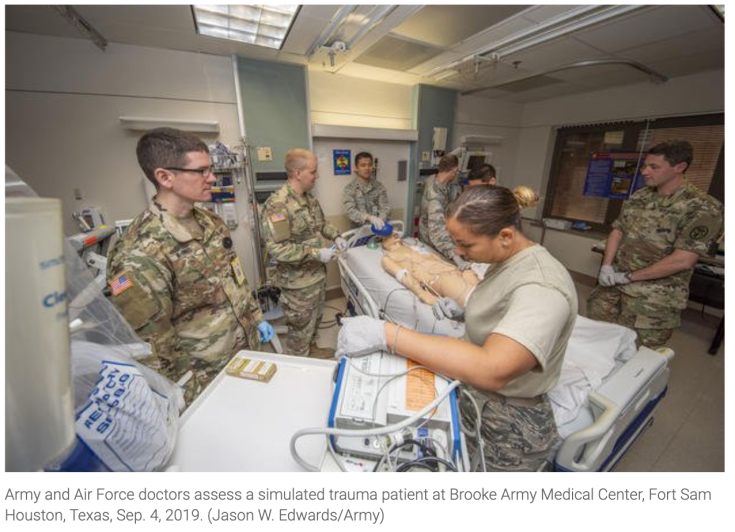 The Army has a message for its retirees: Uncle Sam wants you to help fight the novel coronavirus.

“We need to hear from you STAT!” reads the message, obtained by Military.com.

The Army, it states, is gauging the interest of retired officers, noncommissioned officers and more junior enlisted soldiers in assisting service efforts to treat the sometimes-deadly disease. The message does not specify whether retired troops would be returned to active status or serve in some other capacity.

“These extraordinary challenges require equally extraordinary solutions and that’s why we’re turning to you — trusted professionals capable of operating under constantly changing conditions,” the message states. “When the Nation called — you answered, and now, that call may come again.”

The call was addressed to retirees from the following health care-specific military occupational specialties:

The message came with a caveat: retired personnel now working in a civilian capacity in a hospital or other medical facility should make that known. Army officials said they did not want to pull personnel from service they were “providing to the Nation” in that role. They added that former soldiers from a different specialty who were interested in supporting Army efforts should also reach out to communicate that interest.

As of Wednesday, the Pentagon reported 227 cases of Coronavirus among U.S. troops and 435 total among Defense Department-connected personnel. U.S. cases on Wednesday passed 64,000.

This week, the Pentagon announced that military medical and dental treatment facilities would postpone the majority of elective surgeries, dental procedures and invasive procedures for 60 days as it shifts most resources to fighting the pandemic. A massive relief package moving quickly through Congress Wednesday would triple the number of hospital beds available at these facilities and give the DoD $1.5 billion to open expeditionary military hospitals.

The call to retirees also comes on the heels of a recommendation from the National Commission on Military, National and Public Service for the creation of a “critical skills Individual Ready Reserve” that would serve essentially as a roster of qualified individuals in high-demand fields, likely including health care, on standby to support the Defense Department in times of national emergency. It’s one of 164 recommendations that will be considered by Congress in coming months.

The U.S. Selective Service System also owns a yet-to-be activated standby plan known as the Health Care Personnel Delivery System, colloquially known as the “doctor draft,” that would “provide a fair and equitable draft of doctors, nurses, medical technicians and those with certain other health care skills if, in some future emergency, the military’s existing medical capability proved insufficient and there is a shortage of volunteers.”

That proposed mechanism, however, is designed for use only in wartime and in connection with a broader national mobilization effort, with the approval of Congress and the president.

In a briefing at the Pentagon Wednesday, Air Force Brig. Gen. Paul Friedrichs, Joint Staff surgeon, said he felt generally comfortable that the U.S. military had the resources it needed to continue to fight the virus.

“I’m very comfortable that we’ve analyzed the communities where we have military bases. We’ve looked at what we think their medical requirements would be when an outbreak occurs or if an outbreak occurs in that community,” he said. “Do we have enough health care resources there? Is it the right mix of health care resources? That’s then allowed us to identify what medical capabilities from the military we can offer to help support the whole of government, or to support combatant commands in other parts of the world.”