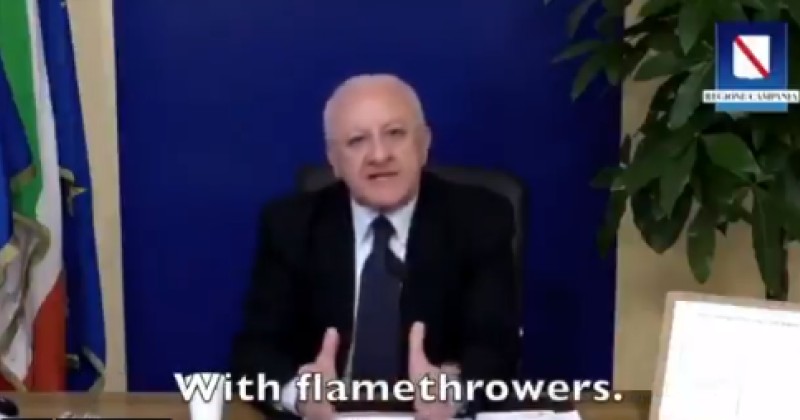 An Italian mayor has threatened to send police armed with flamethrowers to break up graduation parties as some people continue to ignore social distancing rules despite a nationwide lockdown.

“I’m getting news that some [people] would like to throw graduation parties,” said Vincenzo De Luca, mayor of the Italian town of Campania. “We will send police. With flamethrowers.”

Meanwhile, Massimiliano Presciutti, the mayor of Reggio Calabria, accused some Italians of behaving as if they were in the dystopian sci-fi movie I Am Legend by walking their dogs too much.

"I stopped him and said, 'Look, this isn't a movie. You are not Will Smith in I Am Legend. Go home."
This is the updated compilation of Italian Mayors losing it at people violating #Covid19 quarantine. Yes, subtitles are accurate. pic.twitter.com/60V4Csuonb

“Where the f*** are you all going? You and your dogs… which must have an inflamed prostate?” asked Presciutti.

The mayor said he had personally confronted one such individual.

“I stopped him and said, ‘Look, this isn’t a movie. You are not Will Smith in I Am Legend. Go home.”

Antonio Tutolo, the mayor of Lucera, also slammed people for arranging for mobile hairdressers to visit their homes.

“Getting in mobile hairdressers? What the f*** is that for? Who the f*** is supposed to even see you with your hair all done in a casket? Do you understand the casket will be closed?” he said.

At least 40,000 people were fined for being outside without good reason during the first week of the lockdown in Italy, with some facing 21 years in prison.

“Even gatherings like funerals have also been banned,” reports Zero Hedge. “At least 50 people in Sicily are facing serious criminal charges after breaking the quarantine order after having a funeral for a loved one.”

Meanwhile, across Europe, one particular demographic appears to be paying no attention to lockdown laws whatsoever – migrants.