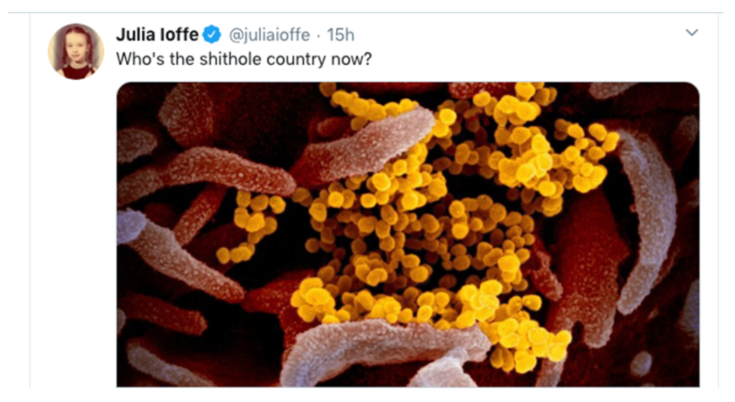 “If you needed anymore evidence these people hate America.”

A leftist columnist seemingly took pleasure in the fact that the US has become the country with the most confirmed cases of coronavirus by mocking President Trump and proclaiming “Who’s the shithole country now?”

Julia Ioffe, who writes for GQ, tweeted out the inane comment along with a link to a New York Times story on the development.

Of course, Ioffe provided no salient facts or useful information, such as President Trump’s assertion that the spike in confirmed cases is down to more robust testing being rolled out.

Nor did Ioffe indicate that in comparison with other hard hit countries, the mortality rate in the US stands at 1.5%, which equates to much fewer deaths per confirmed cases than Italy (10%), Spain (8%), Iran (7.6%) and France (6%).

No, Ioffe simply wanted to vent her pent up Trump derangement syndrome.

Americans are not amused: