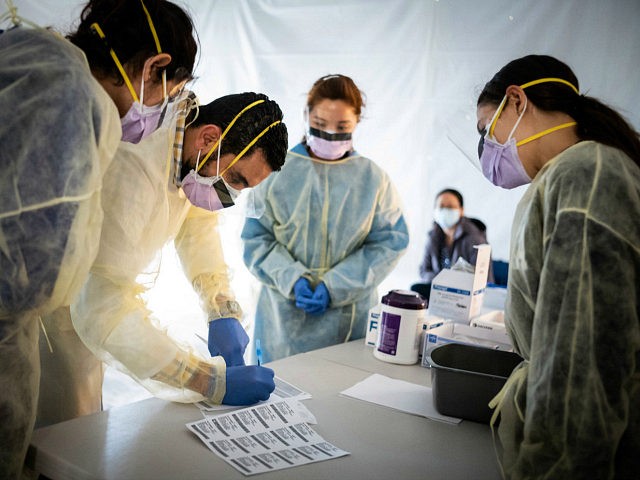 The Chinese coronavirus “is emphatically a disease of globalization,” a pandemic historian at Yale University says.

In an interview published in the Wall Street Journal, Yale University’s Frank Snowden — a historian who most recently in 2006 published a book about Italy’s eradication of malaria — details how the coronavirus pandemic is threatening the globalist worldview of free movement of people and free trade.

The interview finds the Journal‘s Jason Willick seemingly admits the coronavirus is tainting globalism and pushing Americans and the peoples of Europe toward nationhood:

Yet while the [bubonic] plague saw power move up from villages and city-states to national capitals, the coronavirus is encouraging a devolution of authority from supranational units to the nation-state.  This is most obvious in the European Union, where member states are setting their own responses. Open borders within the EU have been closed, and some countries have restricted export of medical supplies. The virus has heightened tensions between the U.S. and China, as Beijing tries to protect its image and Americans worry about access to medical supply chains. [Emphasis added]

Snowden told the Journal the coronavirus is a direct result of the globalization of the American economy after nearly four decades of free trade policy initiatives:

The coronavirus is threatening “the economic and political sinews of globalization, and causing them to unravel to a certain degree,” Mr. Snowden says. He notes that “coronavirus is emphatically a disease of globalization.” The virus is striking hardest in cities that are “densely populated and linked by rapid air travel, by movements of tourists, of refugees, all kinds of business people, all kinds of interlocking networks.” [Emphasis added]

Globalization, Snowden notes, has driven the coronavirus to majorly impact the wealthiest of Americans.

“Respiratory viruses, Mr. Snowden says, tend to be socially indiscriminate in whom they infect. Yet because of its origins in the vectors of globalization, the coronavirus appears to have affected the elite in a high-profile way,” the Journal piece states. “From Tom Hanks to Boris Johnson, people who travel frequently or are in touch with travelers have been among the first to get infected.”

The infection of thousands of the nation’s rich and upper-middle-class has driven class warfare in regions like the Hamptons in New York where some of the wealthiest, most liberal celebrities own property.

A report by Maureen Callahan for the New York Post chronicles how the working class staff of the Hamptons’ elite are turning on them as those infected disregard rules and Center for Disease Control (CDC) guidelines:

“There’s not a vegetable to be found in this town right now,” says one resident of Springs, a working-class pocket of East Hampton. “It’s these elitist people who think they don’t have to follow the rules.” [Emphasis added]

It’s not just the drastic food shortage out here. Every aspect of life, most crucially medical care, is under strain from the sudden influx of rich Manhattanites panic-fleeing … — and in some cases, knowingly bringing coronavirus. [Emphasis added]

“We’re at the end of Long Island, the tip, and waves of people are bringing this s–t,” says lifelong Montauker James Katsipis. “We should blow up the bridges. Don’t let them in.” [Emphasis added]

While globalization has delivered soaring profits for corporate executives, working- and middle-class American communities have been left behind to grapple with fewer jobs, less industry, stagnant wages, and increase competition in the labor market due to decades-long mass legal immigration.

Since 2001, free trade with China has cost millions of Americans their jobs. For example, the Economic Policy Institute has found that from 2001 to 2015, about 3.4 million U.S. jobs were lost due to the nation’s trade deficit with China.

Of the 3.4 million U.S. jobs lost in that time period, about 2.6 million were lost in the manufacturing industry, making up about three-fourths of the loss of jobs from the U.S.-Chinese trade deficit.