This is why establishment media has lost the public’s trust 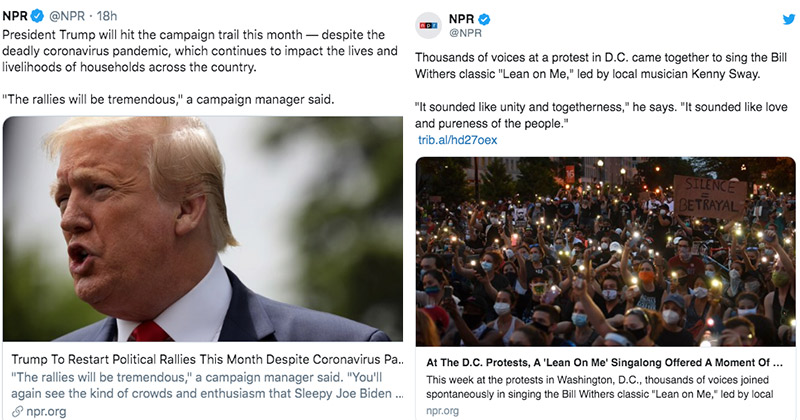 On one hand, NPR praises the thousands of people closely gathered to protest police brutality in the name of George Floyd, but days later, they criticized President Trump for announcing he’ll be holding rallies soon.

The first tweet, posted on Saturday, reads, “Thousands of voices at a protest in D.C. came together to sing the Bill Withers classic ‘Lean on Me,’ led by local musician Kenny Sway. ‘It sounded like unity and togetherness,’ he says. ‘It sounded like love and pureness of the people.’”

Then, on Monday, NPR tweeted, “President Trump will hit the campaign trail this month — despite the deadly coronavirus pandemic, which continues to impact the lives and livelihoods of households across the country. ‘The rallies will be tremendous,’ a campaign manager said.”

Below is another tweet where NPR promotes “throngs of protesters gathered in front of the Lincoln Memorial for a rally” and “over a dozen similar events.”

Other Twitter users have noticed NPR’s hypocrisy as well:

Perhaps the outlet truly believes combatting racism is worth the chance contracting coronavirus.

They did publish an article weighing the risks of protesting amid COVID-19, tweeting out, “White supremacy is a lethal public health issue that predates and contributes to COVID-19.”

It’s no wonder President Trump has called for the defunding of the outlet for years now!

NPR needs to set its political bias aside and decide whether mass gatherings are dangerous to public health or not.