At least four people were killed and more wounded at a Paris police headquarters when a colleague who had recently converted to Islam embarked on a brutal knife rampage, according to reports.

Three officers and an administrative employee were slain by a 45-year-old IT worker on Thursday, French officials say.

A police union spokesman claims the suspect had suffered “a moment of madness,” and other authorities have blamed a possible “grievance with his managers.”

However, BFMTV cites sources alleging the man had converted to Islam roughly 18 months ago.

“Aged 45, the alleged perpetrator of the knife attack that killed four people at the Paris Police Prefecture had converted to Islam 18 months ago, according to our information,” BFMTV reports. “The reasons for his murderous act are not known for the moment.”

The suspect was shot dead during the attack by a rookie officer who had only been stationed for four months.

“For a young colleague, not very experienced, fresh out of school who must make use of his weapon over a colleague, the psychological impact must be immense,” said Nicolas Pucheu, a police union spokesman. “I think it will take a lot, a lot of time to recover from his emotions.”

The alleged perpetrator’s wife has been taken into custody.

Prominent political leader and anti-Islamization figurehead Marine Le Pen has called on prosecutors to disclose the suspect’s possible motives quickly and clearly to the public. 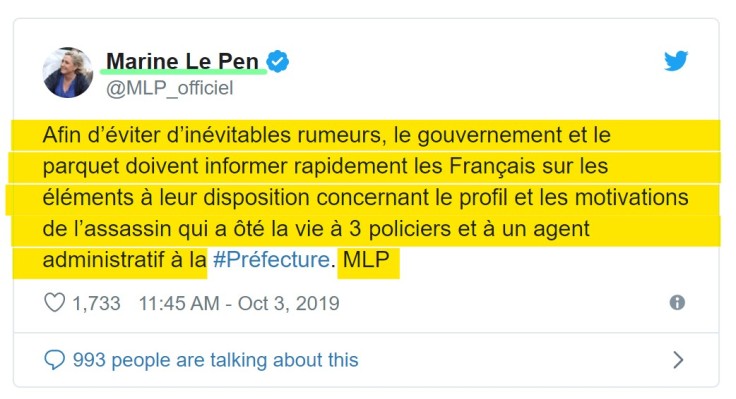 “In order to avoid inevitable rumors, the government and the prosecutor’s office must promptly inform the French about the elements available to them regarding the profile and motivations of the murderer who killed three police officers and an administrative officer at the police station,” Le Pen wrote on social media.

The attack comes just a day after a Paris police “anger march” in protest of poor pay, long hours, and conditions that have led to a rash of officer suicides.