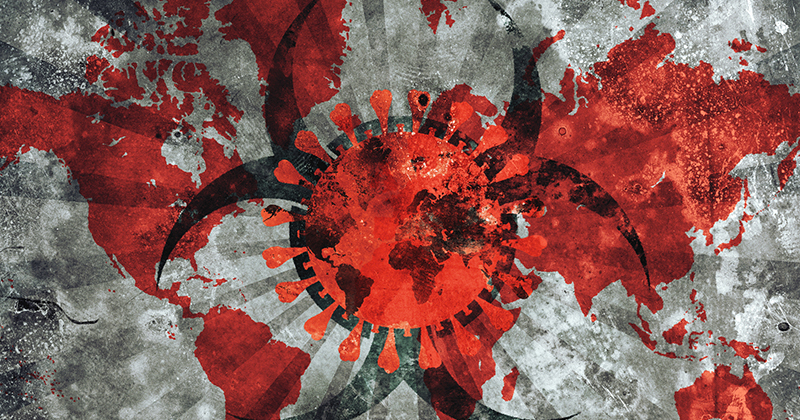 “This virus may use the packing mechanisms of other viruses such as HIV.”

While mainstream scientists continue to perform mental gymnastics to insist that the new coronavirus wasn’t man-made, new research from scientists in China and Europe reveal that the disease happens to have an ‘HIV-like mutation’.

This allows it to bind with human cells up to 1,000 times stronger than the Sars virus, according to SCMP.

Recall that at the end of January, a team of Indian scientists wrote in a now-retracted, scandalous paper claiming that the coronavirus may have been genetically engineered to incorporate parts of the HIV genome.

They wrote “This uncanny similarity of novel inserts in the 2019- nCoV spike protein to HIV-1 gp120 and Gag is unlikely to be fortuitous in nature,” meaning – it was unlikely to have occurred naturally.

Dr. Francis Boyle joins Mike Adams on The Alex Jones Show to break down the toll has taken for standing up for the truth in the wake of bioweapon development.

Fast forward to new research by a team from Nankai University, which writes that COV-19 has an ‘HIV-like mutation’ that  allows it to quickly enter the human body by binding with a receptor called ACE2 on a cell membrane.

Other highly contagious viruses, including HIV and Ebola, target an enzyme called furin, which works as a protein activator in the human body. Many proteins are inactive or dormant when they are produced and have to be “cut” at specific points to activate their various functions.

When looking at the genome sequence of the new coronavirus, Professor Ruan Jishou and his team at Nankai University in Tianjin found a section of mutated genes that did not exist in Sars, but were similar to those found in HIV and Ebola. –SCMP

“This finding suggests that 2019-nCoV [the new coronavirus] may be significantly different from the Sars coronavirus in the infection pathway,” reads the paper published this month on Chinaxiv.org – a platform used by the Chinese Academy of Sciences which releases research papers prior to peer-review.

“This virus may use the packing mechanisms of other viruses such as HIV,” they added.

For those confused, what the latest scientific paper claims is that whereas the Coronavirus may indeed contain a specific HIV-like feature that makes it extremely infectious, that was the result of a rather bizarre “mutation.” However, since the scientists did not make the scandalous claim that Chinese scientists had created an airborne version of HIV, but instead blamed a mutation, they will likely not be forced to retract it, even if it the odds of such a “random” mutation taking place naturally are extremely small.

As a reminder, the running narrative is that the new coronavirus lie dormant in bats somewhere between 20 and 70 years, then ‘crossed over’ to humans through and unknown species – possibly a Pangolin – before it emerged at a Wuhan, China meat market roughly 900 feet from a level-4 bioweapons lab.

And what were they researching at said lab? Among other things – why Ebola and HIV can lie dormant in bats without causing diseases.

According to the new study, the ‘mutation’ can generate a structure known as a cleavage site in the new coronavirus’ spike protein, SCMP reports. “Compared to the Sars’ way of entry, this binding method is “100 to 1,000 times” as efficient, according to the study.”

The virus uses the outreaching spike protein to hook on to the host cell, but normally this protein is inactive. The cleavage site structure’s job is to cheat the human furin protein, so it will cut and activate the spike protein and cause a “direct fusion” of the viral and cellular membranes. –SCMP

(a recent paper published by Dr. Zhou Peng of the Wuhan Institute of Virology, meanwhile, is “Immunogenicity of the spike glycoprotein  of Bat SARS-like coronavirus.“)

According to the report, a follow-up study from a Huazhong University of Science and Technology in Wuhn confirmed Nankai University’s findings.

The mutation could not be found in Sars, Mers or Bat-CoVRaTG13, a bat coronavirus that was considered the original source of the new coronavirus with 96 per cent similarity in genes, it said.

This could be “the reason why SARS-CoV-2 is more infectious than other coronaviruses”, Li wrote in a paper released on Chinarxiv on Sunday.

Meanwhile, a study by French scientist Etienne Decroly at Aix-Marseille University, which was published in the scientific journal Antiviral Research on February 10, also found a “furin-like cleavage site” that is absent in similar coronaviruses.

Chinese scientists speculate that drugs targeting the fuirn enzyme could potentially hinder the virus’ replication inside the human body. Drugs up for consideration include “a series of HIV-1 therapeutic drugs such as Indinavir, Tenofovir Alafenamide, Tenofovir Disoproxil and Dolutegravir and hepatitis C therapeutic drugs including Boceprevir and Telaprevir,” according to Li’s study.

The conclusion is in line with several reports from doctors who self-administered HIV drugs after testing positive for coronavirus, however there have been no clinical tests to confirm the theory.