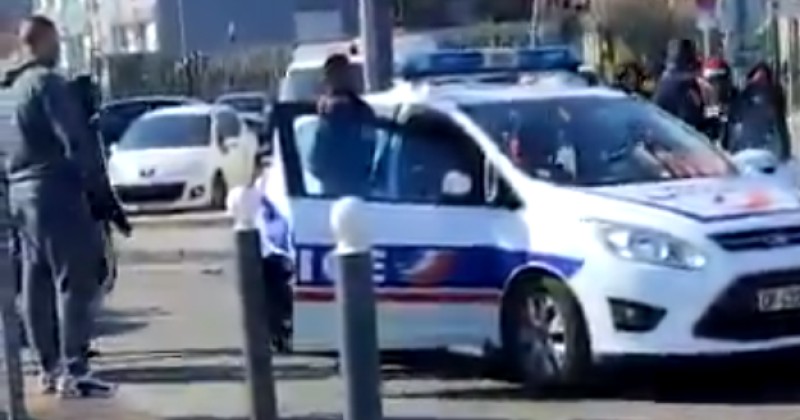 Shout at police during confrontation.

Video footage out of Paris shows migrants violating the country’s quarantine order by being outside without good reason as they squabble with and shout at police.

The clip appears to show a man being arrested and bundled into a police car by officers.

A group of migrants then immediately forms a crowd around the police officers and begins loudly remonstrating with them.

Migrants attack police and refuse to comply with Chinese Coronavirus Quarantine – just like in Germany!

It is delusional to think that these individual will EVER comply with ANY rules -Globalists already new this.

As we highlighted earlier, French citizens are being forced to fill out paperwork every time they leave the house to explain why they are breaking quarantine.

It doesn’t look like migrants in France’s troubled areas are being treated the same way.

In another video, a woman in France breaking quarantine deliberately coughs on police officers.

As we previously highlighted, migrants in Naples, Italy are also violating the lockdown order and roaming around the streets.

Meanwhile, in Germany, migrants rioted, displayed ISIS flags and threatened to burn down their own refugee camp after the facility was quarantined.

French intellectual Eric Zemmour appeared on television to warn that looting was already taking place in migrant neighborhoods of France.

“In Saint Denis, as you have seen, in the 18th arrondissement, at the Duchère in Lyon, there are already many people in the immigrant neighborhoods who have started to revolt,” said Zemmour.

“They don’t want to respect the quarantine. This could end very badly. There is already looting in the supermarkets,” he added.