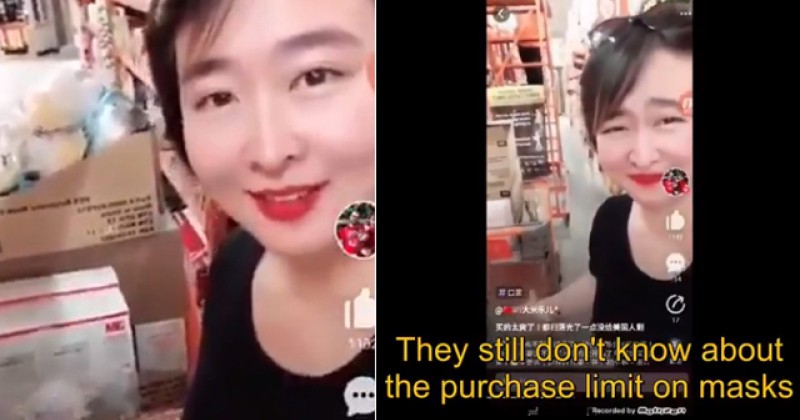 A Chinese woman filmed herself traveling around Florida buying up N95 face masks while bragging, “I didn’t leave a single mask for the Americans.”

The woman shared video clips of her callous stunt on Chinese social media site Weibo. The video was captioned, “So much fun shopping. Bought them all. Left nothing for the Americans.”

“It feels so awesome to buy all the masks!” she states.

The clip shows her filling a pick up truck with boxes full of the masks.

English subtitles added for everyone who would like to understand what she was saying in the video.

The line –
"It feels so awesome to buy all the masks! I didn't leave a single mask for the Americans!" is the title of this video she posted. pic.twitter.com/Pe7qmlz70i

“They still don’t know about the purchase limit on masks,” the she says while laughing. “I bought all the masks, the shelves are empty, you can see my sweat … I feel like a thief.”

The woman continues to cackle while bragging, “A full shopping cart!”

The end of the video shows the pick up truck fully loaded with the masks, which the woman claims to be a “historical moment.”

Apparently, the woman buys products in bulk and then sells them on to Chinese people at a massive profit.

“She can be seen in the above video being aided by her white husband. Neither stand accused of any criminal wrongdoing,” writes Chris Menahan.

The woman’s behavior is clearly disgusting given that there has been a shortage of masks across the western world, leaving front line health care workers exposed.

Be careful though. If you criticize her, the media might call you racist.

Remember, despite the fact that the virus originated in China, despite China lying about its spread, and despite China silencing whistleblowers who tried to warn the world – it’s “xenophobic” to claim COVID-19 had anything to do with China.