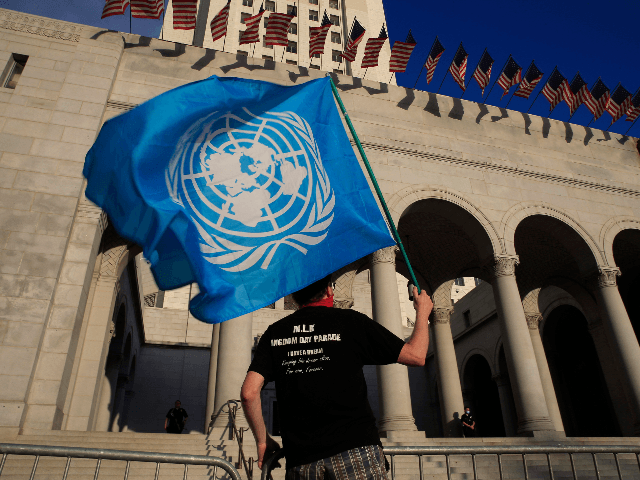 The family of George Floyd, the black man killed while in police custody in Minneapolis on Memorial Day, has sent a letter to the globalist United Nations to ask for its help in disarming police officers in the United States of America.

The family’s legal team facilitated the letter, which was sent on Wednesday, according to NBC News:

The group sent a letter on June 3 to one of the international body’s working groups asking for support for the end of the provision of military equipment and military-type training for police, the teaching of deescalation techniques, independent prosecutions and autopsies for “extrajudicial” police killings, and more.

“When a group of people of any nation have been systemically deprived of their universal human right to life by its government for decades, it must appeal to the international community for its support and to the United Nations for its intervention,” Floyd’s family attorney Ben Crump said in a press release.

The U.N. issued a statement on May 28, three days after Floyd’s death, and included the names of other black people in the U.S. who died in police custody. Michelle Bachelet, U.N. Commissioner on Human Rights, is quoted in the statement, which says, in part:

“This is the latest in a long line of killings of unarmed African Americans by U.S. police officers and members of the public,” Bachelet said. “I am dismayed to have to add George Floyd’s name to that of Breonna Taylor, Eric Garner, Michael Brown and many other unarmed African Americans who have died over the years at the hands of the police — as well as people such as Ahmaud Arbery and Trayvon Martin who were killed by armed members of the public.”

“The US authorities must take serious action to stop such killings, and to ensure justice is done when they do occur. Procedures must change, prevention systems must be put in place, and above all police officers who resort to excessive use of force should be charged and convicted for the crimes committed.”

“The role that entrenched and pervasive racial discrimination plays in such deaths must also be fully examined, properly recognized and dealt with,” she added.

While saying she understood the anger unleashed by Floyd’s killing, Bachelet urged people in Minneapolis and elsewhere to protest peacefully.

NBC did not report on whether or not the Floyd family or its legal counsel have heard back from the U.N.