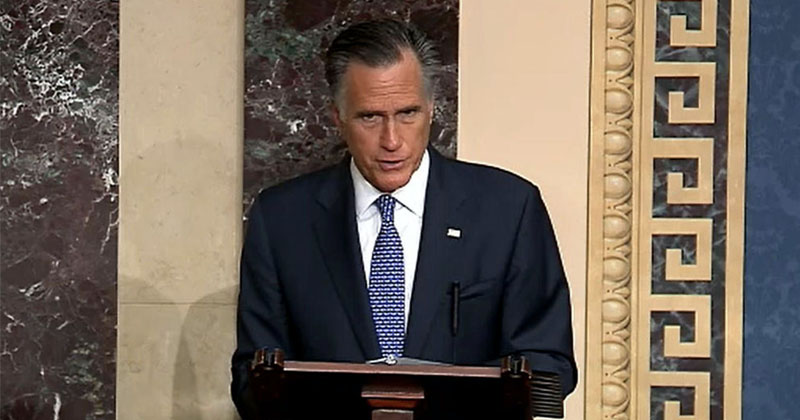 RINO Utah senator once again sides with the Democrats, this time for historic impeachment vote

Republican Utah Senator Mitt Romney announced on the Senate floor that he will vote to convict President Trump on the second article of impeachment on Wednesday.

“The grave question the Constitution tasks senators to answer is whether the president committed an act so extreme and egregious that it rises to the level of a ‘high crime and misdemeanor,’” Romney said. “Yes, he did.”

“The president is guilty of an appalling abuse of public trust,” Romney continued. “What he did was not perfect. No, it was a flagrant assault on our electoral rights, our national security and our fundamental values. Corrupting an election to keep oneself in office is perhaps the most abusive and destructive violation of one’s oath of office that I can imagine.”

His break with the rest of the GOP isn’t so surprising given his disdain for and frequent betrayals of Trump in the past.

Romney’s latest betrayal came when he voted with the Democrats to seek additional witnesses in the impeachment trial last week, resulting in CPAC disinviting Romney from the annual conservative event this year.

Sean Davis of The Federalist noted that Romney’s vote to convict Trump despite not hearing from more witnesses he vote on just proves Romney was playing pure politics.

“Romney’s vote today also shows how dishonest his vote for witnesses was last week,” Davis tweeted. “He clearly didn’t believe more evidence or testimony was necessary since he’s voting to convict today. He just wanted a long, drawn-out process to damage his nemesis.”

Last fall, Romney revealed that he operated a secret Twitter account under the pseudonym “Pierre Delecto” for the sole purpose of disparaging Trump.

When Romney ran unsuccessfully for president in 2012, he sought and received Trump’s endorsement — he then denounced Trump in 2015.

Then when Romney ran for Senate in 2018, he again sought Trump’s endorsement — now he says he will vote to convict Trump in 2020.