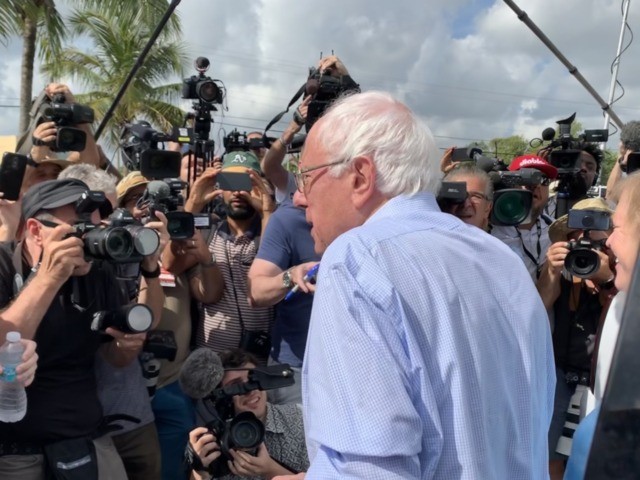 By JOEL B. POLLAK

Supporters of Sen. Bernie Sanders (I-VT) are beginning to understand how badly the mainstream media has abused President Donald Trump — now that the abuse is being turned against them.

In the past several days, Sanders has been the target of withering, over-the-top attacks from journalists, sometimes backed by the Democrat establishment, which is terrified of him winning the nomination.

Some of Sanders’s positions are, in fact, extreme, such as his support for the late Cuban dictator Fidel Castro, or his opposition to Israel, fueled perhaps by the antisemitic leftists who back his campaign.

But some of the criticism has been fraudulent, below-the-belt, unfair and plainly offensive.

On Saturday, for example, MSNBC’s Chris Matthews compared Sanders’s looming takeover of the Democratic Party to the Nazi invasion and occupation of France in 1940. The comparison was doubly offensive because Sanders, who is Jewish, lost relatives in the Holocaust. And it was also surprising because the attack came from left-wing MSNBC, the go-to network for many Sanders supporters.

Last week, prior to Sanders’s victory in the Nevada caucuses, the media reported that U.S. intelligence officials had given him a defensive briefing about Russian effotts to intervene in the Democratic Party primary on his behalf.

That, at least, was an improvement over how the Obama administration dealt with such reports: rather than warning the Trump campaign, the FBI obtained warrants to spy on it.

But the Sanders camp believed that the story had been leaked to damage him politically, especially since the briefing had actually taken place a month before, not during the week of the Nevada caucus.

Another example is the media obsession with “Bernie bros,” the name given to Sanders supporters who are particularly aggressive in support of their candidate, and hostile to rivals’ supporters.

The phenomenon is real, but it is also not unique to the Sanders campaign.

In 2016, conservative filmmaker James O’Keefe uncovered how Democrats linked to the Hillary Clinton campaign were instigating fights at Trump campaign events in an effort to associate the candidate with anarchy.

This reporter has been accosted by Sanders fans — but also by others’, and inexplicably booted from an event by former Rep. Beto O’Rourke (D-TX), something the Sanders campaign has never done.

Even if Sanders supporters could be said to worse than other candidates’ supporters, the media lens appears to be focused on Sanders alone among his Democratic rivals.

In some respects, Sanders supporters are merely getting a taste of their own medicine.

Many fully supported the media’s anti-Trump conspiracy theories, from the Russia collusion hoax to the false claim that the president referred to neo-Nazis as “very fine people.” (Breitbart News challenged Sanders’s campaign manager, Faiz Shakir, last week about the fact that Sanders continues to make provably false claims about what Trump said.)

However, their candidate is also undoubtedly the target of unfair attacks. It’s the “Democrat-media complex” at work, taking out one of their own — not just because some disagree with him, but because they are afraid he will lose.

Perhaps it is finally be dawning on Sanders supporters, and others, that much of what they have been fed about Trump over the past four years by the mainstream media has been hackneyed partisan garbage — and for the same reasons, and by many of the same people.