“We’re on the Italian track,” of mass infection among healthcare providers, one expert said.

Thousands of doctors and nurses in Italy have contracted the 2019 novel coronavirus, and American health workers have said they’re terrified of getting the illness, especially in the face of startling and systemic equipment shortages.

Some emergency room doctors in the U.S. have already tested positive for the virus, and other medical providers have personally prepared for the possibility of infection—creating wills, isolating off parts of their houses from the rest of their families, recording bedtime stories for their children on their phones. But what happens to an already-cascading national health crisis when, even if equipment shortages are resolved, medical personnel are falling out of rotation?

Without concerted action to protect healthcare workers, experts said, America could be facing a shortage when its citizens need them most.

Irwin Redlener, director of the National Center for Disaster Preparedness at Columbia University and an expert on U.S. readiness for pandemics, said there were three main ways to staff hospitals if a large number of providers get sick. 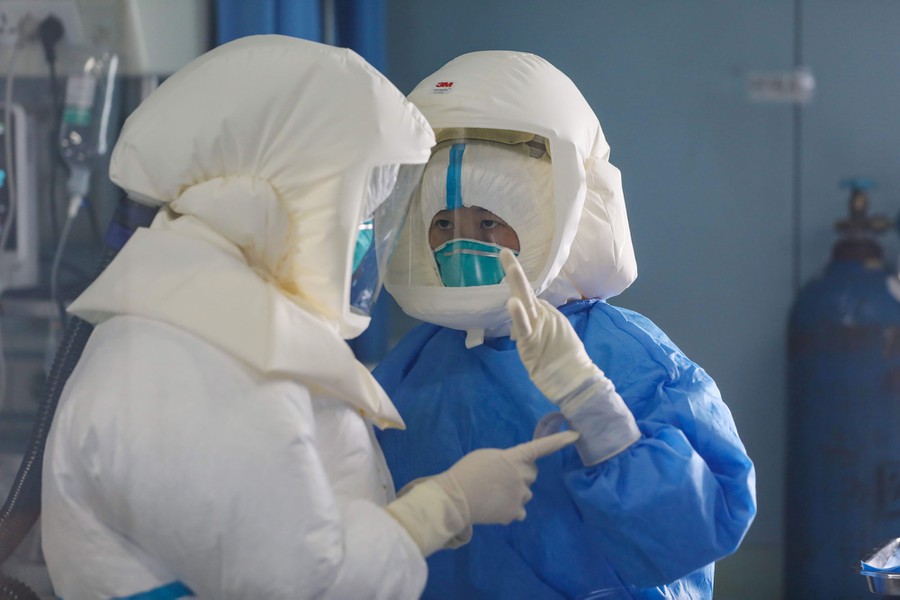 “Many of us in the business are worried about this, about the back-up plan for if they’re ill or have to stay home or—God forbid—don’t survive,” said Redlener. “The only problem with bringing in retired people is that they’re older, and many will have preexisting conditions.”

Then there’s the federal National Disaster Medical System, which exists to supplement health and medical systems during times of crisis. The system has sent reserve doctors from all over the country to respond to emergencies, including the aftermath of natural disasters like Hurricane Sandy. The pool of doctors and nurses from the system can be requested by federal, state, local, tribal, or territorial authorities.

But those resources are finite, and travel is no simple matter in the face of a creeping trend toward nationwide lockdown.

“If we’re dealing with a single major disaster someplace, then we have enough for that, but if we have clusters all over the country pop up, it becomes a problem because there’s so much demand across the board,” Redlener said. “For every health professional we call up, we take them away from their regular jobs, which are also critical.”

A physician might not, for example, be able to take off to help treat the outbreaks in Washington state or New York if their own hospital is having trouble with staffing because of the spread of infection there.

A third option Redlener cited would invoke the use of international medical graduates who have been educated, trained, and employed as physicians or nurses in other countries, some of whom already live in the U.S. and are waiting to be placed in an American gig.

“If you’re moving to the U.S. and want to practice medicine here, you usually have to take a residency all over again in the U.S., and it’s very difficult to secure places in those programs,” he explained. “For those people, it’s time to think about waiving the requirements to repeat a full-blown residency.” 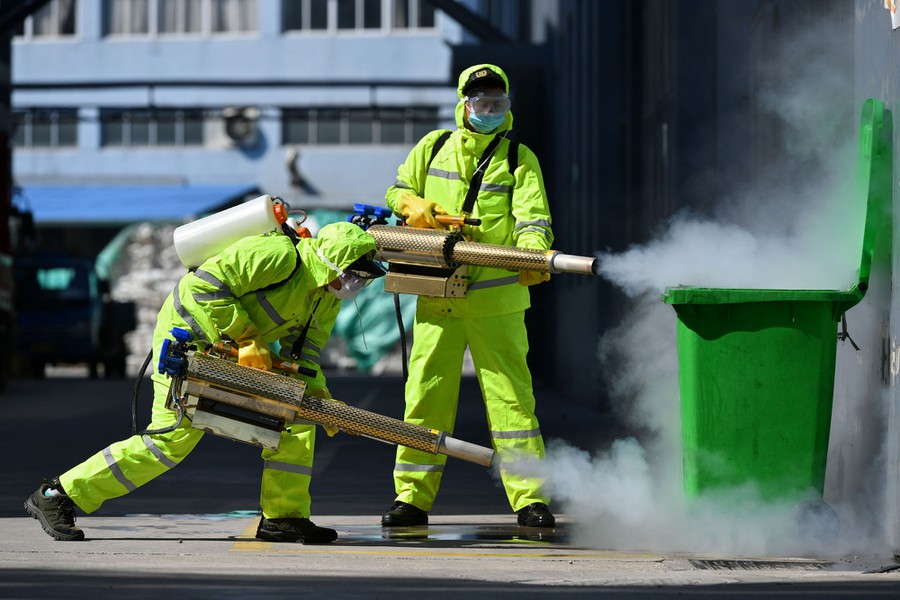 Of course, none of this would feel as precarious if it weren’t for the dire shortage of personal protective equipment, including masks, for medical professionals, which federal officials have promised to shore up.

Many hospitals have lowered standards of care, delayed elective surgeries, and begun utilizing telemedicine in unprecedented volumes to accommodate the potential surge of critically ill patients, as Slate reported.

For better or for worse, the options in the U.S. mirror what’s been done in Italy to handle the dramatic caseload of more roughly 60,000 patients. As of last week, more than 2,629 health care workers in Italy had reportedly contracted COVID-19. Throughout the country, medical students and nurses have graduated early to work in the field, technicians and medical assistants in training were fast-tracked to the front lines, the country’s health ministry has asked retired doctors to return to work, and health workers have put in double shifts with few breaks.

Health providers also succumbed to the coronavirus in China—including a whistleblower in Wuhan who tried to call attention to the deadly disease. But safety measures largely implemented in Hubei province to protect healthcare workers were meticulous, according to William Haseltine, president of the global health think tank ACCESS Health International, who recently chaired the U.S.-China Health Summit in Wuhan, where the virus is believed to have originated.

“All of their healthcare workers were outfitted with high-quality hazmat outfits—not makeshift,” said Haseltine. “If you were in what’s called ‘controlled quarantine’ in a hotel room, the person who delivered your food was in a hazmat outfit. The people who came in to clean your room were in full hazmat outfits and cleaned your room with Lysol every day.”

Meanwhile, in the U.S., in addition to nationwide supply shortages for protective gear, precautions and preparations vary from state to state.

“We have contingency plans, a command center, cross-site privileges for staffing, so we can move bodies around if needs arise and staff gets sick,” said Rob Davidson, an emergency physician at Spectrum Health Gerber Memorial in Fremont, Michigan. Davidson also serves as executive director of the Committee to Protect Medicare, a self-described public advocacy and grassroots lobbying group that works “to persuade elected officials to support health care for all Americans.”

“We’re preparing for this, but don’t know when it’s going to hit and how bad,” he told The Daily Beast on Friday. As of Monday morning, the total number of cases in Michigan had more than doubled, surpassing 1,000. At least nine people had died.

Davidson said he knew of at least one physician at risk of severe infection who transferred his practice to telemedicine, and Davidson said that his family decided he should isolate himself in the basement of their home if he comes into contact with a positive patient that requires intubation or other intense exposure.

“Our dedication is to doing the right thing for our patient, and what if we can’t do good enough medicine, or end up choosing who lives and who dies just because there were too many patients?” asked Davidson. “The nightmare scenarios that you hear playing out in Italy, that’s where none of us want to be.”

Do you know something we should about 2019 novel coronavirus, or how your medical providers are responding to it? Email Olivia.Messer@TheDailyBeast.com or securely at olivia.messer@protonmail.com from a non-work device.

He was far from alone in wondering how the system might respond.

“The entire hospitalist team at my hospital is terrified,” said an internal medicine doctor in Ohio who asked to remain anonymous over fear of retaliation from her employer. “Our worst fear is contracting the virus and spreading it to our spouses and children. We are worried about our patients, of course, but none of us want our personal decision of becoming a doctor—and serving on the front lines—to adversely affect the ones we love.”

She said that older doctors in her practice—primarily those with grown children and no loans—have mentioned that they’ve considered quitting.

“Fear of harming your family will lead to those thoughts in even the most virtuous physician,” she said.

A pharmacy executive who works at a rehabilitation hospital in Austin, Texas—and who also requested anonymity over fear of professional retaliation—described a similar calculus.

“My wife is a surgical physician’s assistant, and I work with elderly people, on average in their seventies, who are mostly recovering from strokes and hip surgeries,” he said, adding that his 71-year-old mother lives in his home and helps care for his one-year-old baby with a congenital condition who is vulnerable to severe infections—and his kindergarten-aged daughter.

After reading what he called “horror stories” about “not enough gowns, not enough masks,” the pharmacist said he and his wife began discussing contingency plans for the possibility that they could end up in the intensive care unit after contracting the disease.

“Worst case scenario, my kids lose both parents,” the pharmacist said, adding that he was processing his fear the way many other Americans were: “wine and denial.”

Dr. Bernard Ashby, a vascular cardiologist based in Miami Beach, Florida, told The Daily Beast that high numbers of sick—or dead—medical providers is “a plausible scenario given that we’re not protecting them.”

“That would spell out disaster for our patients and our healthcare system,” Ashby said, adding that, like most doctors, he’s more worried about becoming a vector than about getting sick himself. “I have a newborn child and a mother with chronic illness. I’m very concerned about spreading it to my family, so I’m currently self-isolating from them. It’s tough.”

Ashby said that hospitals all over the country should be screening the temperature of providers as they come into work and testing hospital staff more readily, which has not yet been possible because of the nationwide shortage of diagnostic kits.

But based on the federal response to the crisis and the lack of supplies in the U.S., said Haseltine, “We’re on the Italian track.”

Losing doctors and nurses to the coronavirus “is going to be devastating,” he continued, noting that the overwhelming fear “is already psychologically extremely damaging to our healthcare workers.”

And as a country, he said, “It puts us in even higher jeopardy.”