This is almost laughable. 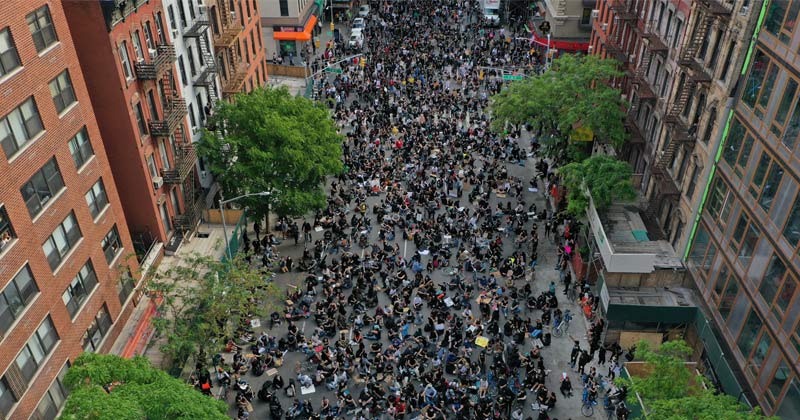 How mainstream media outlets report on things like studies and other “pop-science” research that always seems to confirm progressive narratives – or at least that’s how it might appear to any reader who doesn’t read past the 3rd paragraph (many don’t), or doesn’t take a closer look at the research themselves.

Such is the case with a recent report published by Time Magazine proclaiming that the protests aren’t to blame for the recent resurgence in coronavirus cases in most parts of the country. Of course, a closer look shows that a more appropriate title might be “Nationwide COVID-19 Spike Caused By Protests Not As Bad As Feared”.

Already, local news reports from Texas, to California to New York to Washington DC and Minnesota (where several national guard members tested positive) have confirmed individual case who were likely infected – along with friends and others they knew – at the protests.

Furthermore, public officials across the country – most notably Bill de Blasio – took steps to obfuscate any impact the protests might have had by instructing contact tracers not to ask.

While it’s true that several cities that some major protests haven’t seen major spikes, as Time points out, many others have. In New York, the 7-day average daily case numbers have largely plateaued, but they haven’t continued to shrink like we’ve seen in Europe. PA’s governor just ordered citizens to wear masks in public after the state reported a record daily tally on Wednesday, following an uptick in cases in Philadelphia and the surrounding suburbs.

In what’s considered the first systematic research into the issue, a team of economists determined that only one of 13 cities involved in the earliest wave of protests after Memorial Day saw an increase that would fit the “pattern”

Several cities that saw major protests, including New York, Chicago, and Philadelphia, have not experienced a new surge in cases in the days and weeks following. And in cities and states that specifically set out to test protestors, like Massachusetts, Seattle, and Minnesota, the results have shown that demonstrators were not considerably more likely to test positive compared to the general population.

Of course, as Time points out, just because the resurgence didn’t happen exactly how epidemiologists assumed it would doesn’t mean the protests didn’t contribute to the spike. It just means whatever the impact was, it apparently didn’t conform to epidemiologists’ expectations.

“Mixing in large groups increases the probability of transmission. I don’t think that’s controversial,” says Chad Cotti, a professor of economics at University of Wisconsin-Oshkosh. But, he adds, “how much transmission you get is clearly going to be a function of the environment and the circumstances. Are people wearing masks? Are people physically touching each other? Is it indoors, is it outdoors?”

But this presents another problem as Cliff Mass writes on his Weather Blog. The lack of a surge due to the protests shows that the safety of outdoor air is now incontestable

However, but even in the Seattle’s King County, an early hotspot that was also a hotbed for protests, cases have climbed, though many have attributed this to an increase in testing. Since testing rates have climbed since the early days of the outbreak, it’s difficult to say whether the protests might be responsible for practically all of these new cases: If health officials collected this information, they would be able to say for certain how many infected people had at least attended the protests.

As Time adds: “Mixing in large groups increases the probability of transmission. I don’t think that’s controversial,” says Chad Cotti, a professor of economics at University of Wisconsin-Oshkosh. But, he adds, “how much transmission you get is clearly going to be a function of the environment and the circumstances. Are people wearing masks? Are people physically touching each other? Is it indoors, is it outdoors?”

This is almost laughable. The protesters were often packed together, and many didn’t wear masks to the events. Those that did frequently had them pulled down around their chin to shout slogans and hurl obscenities at the police.

Finally, Time finishes by noting that everything reported in this ‘study’ was apparently caveated to the point of uselessness. Though many states didn’t see the initial surge in new infections, the creep – both nationally, and in many states – of cases and hospitalizations since the protests is difficult to simply dismiss. Furthermore, the rise in cases and hospitalizations with fewer fatalities is consistent with the demographics of the marchers.

In Los Angeles and Washington, D.C., respectively, several police officers and members of the D.C. National Guard tested positive following the demonstrations; law enforcement groups nationwide have been criticized for failing to wear masks during the demonstrations. Furthermore, smaller protests have continued through June, and it will take time before any spread of the virus at these more recent events shows up in the data.

The notion that we can blame all of the resurgence on bars opening prematurely is specious, though we wouldn’t be surprised to learn that this was, indeed, a major contributing factor as well. The two aren’t mutually exclusive.

“I think indoor transmission, events that might be happening at bars, are more important for the trajectory of the virus than the protests were,” says Dr. Amesh Adalja, an infectious disease and pandemic preparedness expert at the Johns Hopkins Center for Health Security. “What the protests added wasn’t as impactful as some of the other changes that were going on in society at the same time.”

Bottom line: If pandering public officials had the will to stand up to the woke mob, we’d be collecting more data about whether people reporting new cases attended protests. While correlation and causation are two very different things, it would be a start, at least.