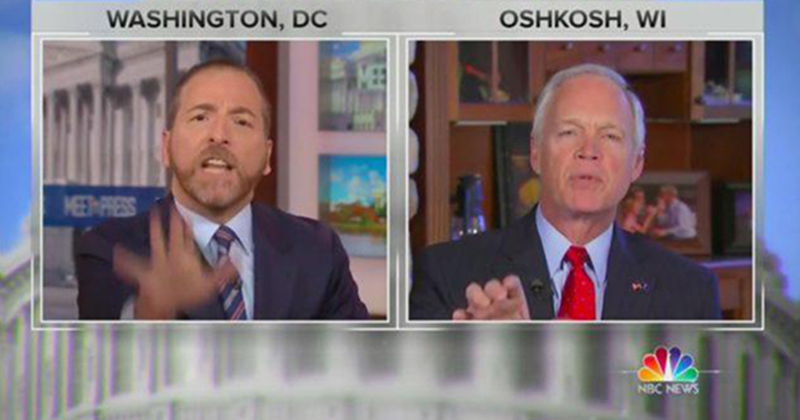 There was a full on Trump-Ukraine blow-up on Sunday’s Meet the Press, with Chuck Todd quick to slam what he called “Fox News Conspiracy Propaganda Stuff!”

How could anyone not trust the CIA after the “Iraq has WMDs” hoax and the FBI after the Russiagate hoax?!

The questionable actions of former FBI Director James Comey, former Deputy Director Andrew McCabe and former CIA director John Brennan have made it impossible for Americans to trust the country’s intelligence apparatuses and created a sense of extreme skepticism, Sen. Ron Johnson, R-Wis., said during an interview that aired Sunday.

Johnson appeared on NBC News’ “Meet the Press” and got into a heated debate with host Chuck Todd over House Democrats’ impeachment efforts and various intelligence community abuses. The GOP senator said there still were unanswered questions when asked if he thought Russia interfered in the 2016 election.

“Do you not trust the FBI — you don’t trust the CIA?” Todd shot back.

“No, no, I don’t,” Johnson stated. “Absolutely not. After [former FBI Agent] Peter Strzok and [attorney] Lisa Page? After James Comey, John Brennan, no, I don’t trust any of these guys in the Obama administration.”

That’s being reported as a “gotcha.”

Todd’s interview with Brennan was actually even more embarrassing:

Chuck Todd lamenting with John Brennan, who accused the president of treason for two years, that Brennan has been “character assassinated” is friggin mindblowing pic.twitter.com/So1WyWI0I7

Like leaking DNC/Hillary/FBI-paid for Russian disinformation & spreading the lie of Russia collusion for 2+ yrs?

"This dishonesty, this info now is overwhelming & inundating the air waves"