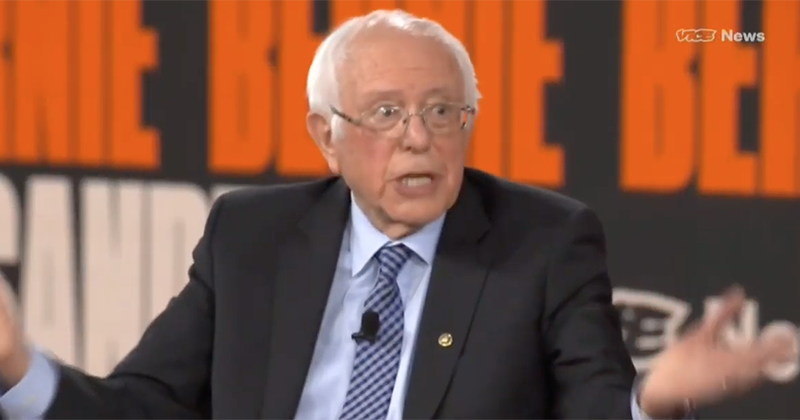 “Should you do that, tear it down? I don’t know, maybe the answer is yes”

As President Trump continues efforts to divert funding to build a new border wall, Democratic Presidential candidate Bernie Sanders said Monday that he would consider ‘tearing down’ the existing border barriers if he is elected.

Sanders reasoned that the current barrier on the US-Mexico border is ‘symbolic’.

He claimed that tearing the wall down “may be” the correct thing to do, adding “but you know it’s how much is it going to cost to tear it down?”

“Should you do that, tear it down? I don’t know, maybe the answer is yes.” Sanders said.

“Yeah, I’ll always look,” Sanders replied, adding “but again if it’s going to cost me billions of dollars to tear it down, I’d rather invest that maybe in the needs for child care in this country.”

David Knight details the new Hulu series painting a favorable picture of Hillary Clinton and exposes the vitriolic hate she has for Bernie Sanders and any other Democrat Party dissidents that would dare defy the establishment and interfere with her ambition.

Sanders also promised to put a stop to “99% of deportations”, even including for violent criminals.

At the same event, Joe Biden, the ‘moderate’ Democratic candidate, vowed to end all illegal immigration detention “across the board”:

Joe Biden: end all illegal immigration detention “across the board” pic.twitter.com/YkwHiNJYcC

Is it any wonder that the consensus among migrants is that Democrats are going to allow them to illegally flood into the US if they win the election?

Bernie and Biden’s comments came on the same day that thousands of migrants stormed a bridge over the Suchiate River from Guatemala to Mexico, attempting to move further north with a view to entering the US.