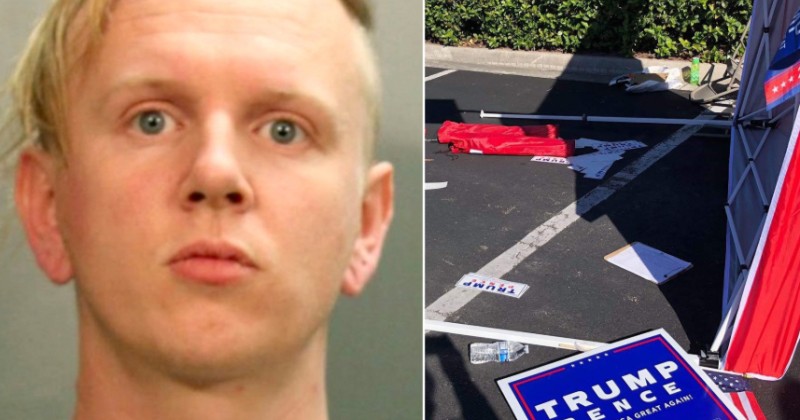 Told police “someone had to take a stand.”

The suspect who drove a vehicle through a voter registration tent occupied by Trump supporters in Jacksonville admitted to police that he had an anti-Trump motive and told authorities “someone had to take a stand.”

27-year-old Gregory Timm drove his van into a pro-Trump Republican voter registration drive tent at a Jacksonville Walmart on Saturday and was subsequently arrested and charged with aggravated assault, criminal mischief and driving with a suspended license.

According to an arrest report obtained by Action News Jax, Timm told police he drove his van through the tent because “someone had to take a stand.”

He also showed police a video he made of himself driving towards the tent as the victims stood in front of it. The video ended before Timm actually drove into the tent, a moment he described to police as “the good part.”

Timm also told police he made a video of himself prior to driving through the tent, but this video has not been made public.

#JSO has arrested the suspect who drove through the voter registration tent in the area of 11900 Atlantic Boulevard.

“The suspect advised that he does not like President Trump,” according to the police report. Timm “did not show any emotion, recorded the aftermath of the incident and gave an obscene gesture,” according to Action News Jax.

“What’s clear is, this individual drove up to a tent and was clearly registering voters with Donald Trump’s name and attire around them. And drove a vehicle at volunteers that’s what we know, looks pretty political to me,” said Mayor Lenny Curry.

Nobody was injured during the incident, although victims were left in a state of severe shock.

Will the media now dig through Timm’s social media history to discover who radicalized him into attempting this act of terror?

Or will the story completely disappear by the end of the week?