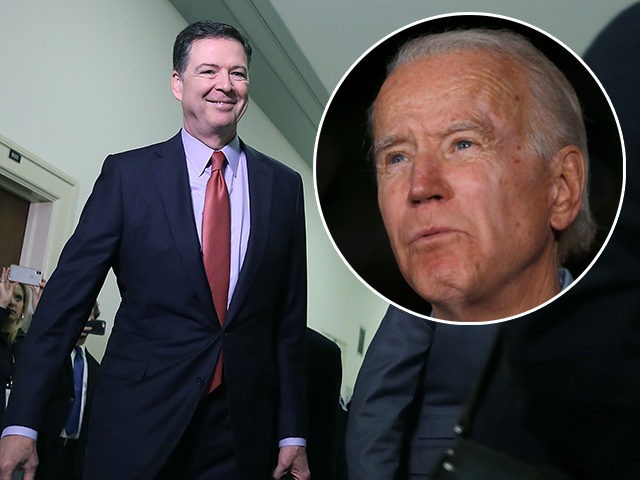 “Voted in first Dem primary to support party dedicated to restoring values in WH. I agree with @amyklobuchar: We need candidate who cares about all Americans and will restore decency, dignity to the office,” Comey wrote on Twitter. “There is a reason Trump fears @joebiden and roots for Bernie. #Biden2020.”

Andrew Bates, the Biden campaign’s rapid response director, seemingly rejected Comey’s endorsement, tweeting: “Yes, customer service? I just received a package that I very much did not order. How can I return it, free of charge?”

Comey, who quit the Republican Party in 2018, donated $2,700 to Sen. Amy Klobuchar’s (D-MN) now-defunct campaign, while his wife made two contributions — $1,000 and $1,700 — to her last year. After dropping out of the Democrat presidential primary on Monday, Klobuchar endorsed Biden, saying the former vice president “can bring our country together and build that coalition of our fired-up Democratic base.”

In addition to Klobuchar, former South Bend, Indiana, Mayor Pete Buttigieg threw his support behind Biden after dropping out of the race Sunday. Appearing together in Dallas, Buttigieg said Biden is the only candidate who can “bring back dignity to the White House.”

“When I ran for president we made it clear that the whole idea was about rallying the country together to defeat Donald Trump and to win the era for the values that we share,” the former mayor said. “And that was always a goal that was much bigger than me becoming president and it is in the name of that very same goal that I am delighted to endorse and support Joe Biden for President.”
Former Rep. Robert Francis “Beto” O’Rourke (D-TX) also endorsed Biden on Monday.

“And then this weekend I was talking to my oldest son, Ulysses, and told him I was going to vote for Biden,” he added. “And he said, ‘Well, you should endorse him.’ And I said, ‘OK, that makes sense.’ He said, ‘If you want this guy to win, you should do everything you can to help him.’”