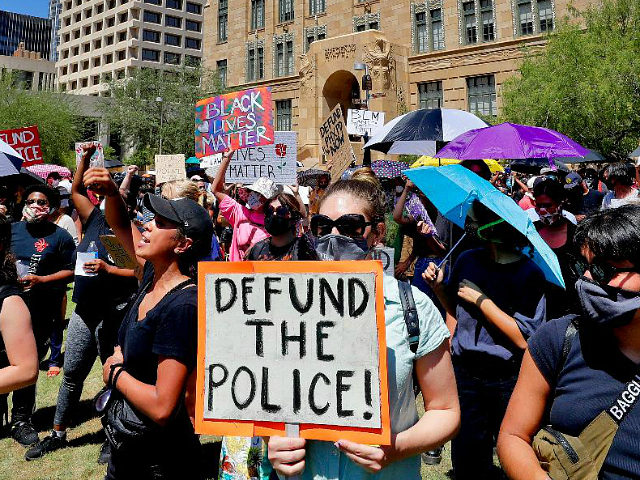 A new poll released Friday showed that 55% of Democrats approve of calls by the Black Lives Matter movement to “defund the police” — though 64% of the country as a whole opposes the idea.

Strong majorities of Americans oppose the movement to “defund the police” and some of its most significant goals, specifically reshuffling funding away from law enforcement to support mental health, housing and education programs, a new ABC News/Ipsos poll released Friday finds.

Nearly two-thirds of Americans oppose calls for defunding police departments, compared to 34% who back the movement, and 60% specifically oppose reducing the budget for police to reallocate it to other public health and social programs, while 39% support that move.

Democrats stand as the lone faction among the political tribes that approve by a majority of defunding the police (55%) and redirecting it to mental health, housing and education programs (59%).

Black Americans support “defund the police,” ABC noted, “though not overwhelmingly so,” at 57%, with 64% approving of the idea to move police funding elsewhere.

However, “nearly three in four white Americans and 57% of Hispanics are against defunding the police, and two-thirds of whites and 58% of Hispanics oppose moving budgets elsewhere.”

The poll was conducted among 686 adults, with a margin of error of 4.2%. It partially confirms the result of a similar poll last week, which found that 65% of Americans oppose the idea.

Black Lives Matter activists across the nation have demanded that local governments “defund the police” or “abolish the police.”

One of the core demands of the so-called “Capitol Hill Autonomous Zone” (CHAZ) occupying part of downtown Seattle, for example, is that the police department be abolished.

Democrats in Minneapolis, Minnesota — where George Floyd was killed on Memorial Day while in police custody — announced that they back proposals to disband the police department.

Last week, Los Angeles Mayor Eric Garcetti announced that he would be cutting up to $150 million from the budget of the Los Angeles Police Department (LAPD) — over 10% of the total — and using it to invest in “communities of color.”

Asked by Breitbart News earlier this week whether removing police from the LAPD would make “communities of color” more unsafe, Garcetti said that more police did not necessarily mean less crime.