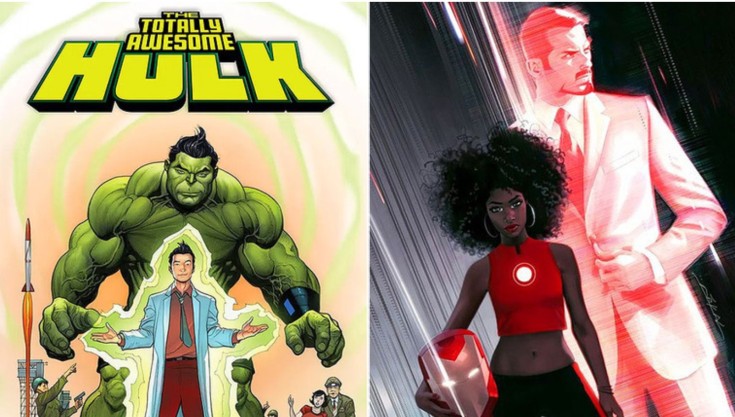 Pushing diversity at the cost of great storytelling is wreaking havoc on the comic book industry sales and splitting the fanbase. But beware anyone who dares criticize as they risk being cast out of the industry.

In autumn 2014, readers of American Superhero comics came across something  a bit different. The first issue of Marvel’s The Unbeatable Squirrel Girl saw an established character strangely changed from a cute and sassy young woman into an awkwardly shaped, goofwho cracked unfunny gags about pop culture. She was, bluntly, ugly – deliberately badly proportioned and drawn in a casual “indie” fashion. The book was aimed at hipsters, not Marvel fans.

Readers didn’t take to the character because it looked an ironic in-joke. It became a flagship “diversity” book for Marvel.

Newcomers arriving directly from the movies were baffled to find that the Hulk was Korean-American and Iron Man was a teen black girl. Recent years have also seen an Afro-Latin Spider-Man, a female Muslim Ms Marvel, and a black Captain America.

The drive to “diversify” comics was strange as American comics were already diverse; comic-book readers had always accepted new characters with good stories.

‘This book wasn’t written for you’

What made matters worse was that new writers seemed to have little ability to write American superhero comics, a genre with specific traditions and rules. In order to appeal to a new readership, Marvel Comics hired female authors of young adult fiction whose main subjects were human interest and slice-of-life drama – not very compatible with the hero mythos, action and thriller stories.

Some writers made no effort to conform to expectations. The current James Bond comic (published by Dark Horse) is written by Vita Ayala and Danny Lore, two black women who have focused their story on a black female character.

Fans resented the blatant alteration of history by newcomer writers and editors who believed they were more virtuous than the fans. Meanwhile, all criticism of the new authors was dismissed out of hand.

The new writers and their corporate backers accused critics of bigotry and hatred.  Creators abused fans and told them “this book wasn’t written for you” and “I don’t want your money”. There was glee about upsetting devoted fans by despoiling beloved characters. Marvel Comics and DC to give work to freelance creators who were actively  driving away potential customers.

New creators alienated regular fans while not significantly increasing consumption by women, younger readers and non-white audiences. A war between comic-book publishers and fans had begun.

The Birth of ComicsGate

By 2017, long-time readers had become bored of masculine women acting like men, men being weak and stupid, and ordinary white Americans being portrayed as dumb racists. They were depressed by the absence of heterosexual relationships between characters. They resented the Mary Sues (tokenistic,overpowered characters who have no flaws and face no real peril) being used for purposes of representation. They disliked new heroes who moped around or acted like petulant bullies.

Readers simply had had enough.

On a daily basis I read websites and watch videos where fans reject political correctness and the disrespect of professionals. Eventually, these disparate voices formed a loose alliance called ComicsGate, critiquing bad comics and creating communities in video comment sections. In my book Culture War: Art, Identity Politics and Cultural Entryism I documented the rise of independent creators and readers who wanted traditional apolitical adventures.

The Future of Comics?

In an industry dominated by a few major publishers, a single distributor and a limited (and contracting) network of specialist retailers, politics has destroyed producer-consumer rapport and long-term trust. The narcissism of political activists in firms, lack of management oversight and predatory practices have decimated the American superhero comic industry at a time when its characters are more famous than ever.

But the future of comics could be the independent creators within the ComicsGate movement.

Prominent creators who believed that they had been unofficially blacklisted by their firms (including Mitch Breitweiser, Jon Malin, Doug TenNapel and Ethan van Sciver) decided to publish politics-free adventure books independently. Using the crowdfunding platform Indiegogo, they sold their apolitical comic books. Van Sciver’s book CyberFrog Bloodhoney raised more than $950,000. Campaigns by ComicsGate creators have generated more than $2 million in a year despite being frozen out of media coverage.

And they have also had to face industry obstacles.

When Richard Meyer (who makes video critiques like Comics Matters w/ Ya Boi Zack) tried to publish his action-hero comic Jawbreakers with Antarctic Press, the project was abruptly called off. Meyer claims that the deal was interfered with by Mark Waid, prominent writer and public opponent of ComicsGate. Meyer is suing Waid for compensation in ongoing litigation.

The boom in crowdfunding projects has opened doors to new creators, including Clint Stoker, who runs the YouTube channel Sweetcast. Building a rapport with viewers through regular videos, Stoker’s first book, Downcast, earned $31,667. I asked him if ComicsGate had changed the landscape for newcomers.

He said: “Yes! I had a lot of opportunities because of CG. There is a lot of excitement around Indie comics in CG. I benefit from networking and getting backers to give my book a shot.”

Asked what ComicsGate should mean to an outsider, Stoker replies “Let the books speak for themselves!”

Can Stoker and others challenge the primacy of the industry giants? As long as people want to read classic stories of heroism, and Marvel and DC refuse them to the public, they have every chance.

By Alexander Adams, a British artist and writer. His book Culture War: Art, Identity Politics and Cultural Entryism is published by Societas.