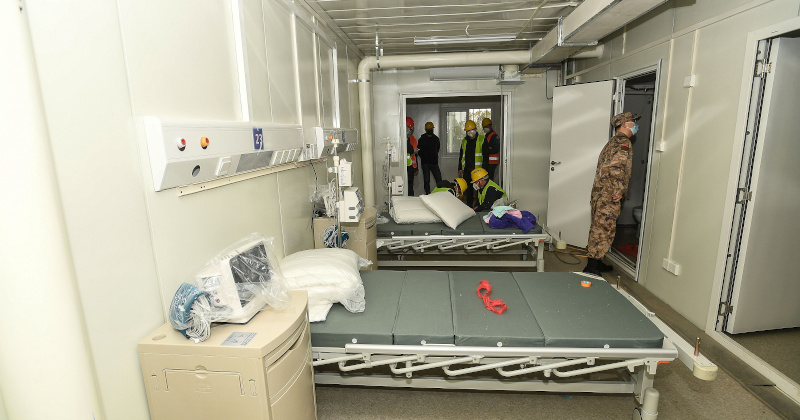 Late last night, we reported that the death toll from the coronavirus outbreak had surpassed 360 as more suspected cases popped up in New York.

Though no deaths have been reported overnight, Chinese officials warned yesterday that many more cases and deaths would be confirmed on Sunday/Monday.

In the meantime, Chinese markets finally faced their inevitable reckoning. Despite the best efforts of the PBOC and the government, the Chinese market bloodbath was about as bad as expected.

Matt Bracken joins The Alex Jones Show to analyze the state of the world amid a potential pandemic.

But over in the US, investors ignored the latest news out of China and have seemingly bought into the WHO’s optimistic message and China’s accusations about an ‘alarmist’ Washington.

This is surprising, since anybody who has been paying close attention to the situation in China should know that this is far from the truth.

Late last night, while most of America was watching the Superbowl, the New York Times published a scathing story recounting what it’s like on the ground in Wuhan right now. The truth is that all of the warnings of alleged ‘conspiracy theorist’ have more or less turned out to be correct. Supply shortages are still making it impossible for China to diagnose every case of the virus.

Ms. An, 67, needed an official diagnosis from a hospital to qualify for treatment, but the one she and her son raced to last week had no space, even to test her. The next hospital they were referred to here in Wuhan, the city of 11 million people at the center of the outbreak, was full, too, they said. They finally got an intravenous drip for Ms. An’s fever, but that was all.

Since then, Ms. An has quarantined herself at home. She and her son eat separately, wear masks at home and are constantly disinfecting their apartment. Ms. An’s health is declining rapidly, and even keeping water down is a struggle.

Chilling stuff. And once again, doctors and health-care workers are leveraging their newfound immunity to shed a light on the government’s brutality.

Last month, the government put Wuhan in a virtual lockdown, sealing off the city and banning most public transportation and private cars from its streets in a desperate effort to contain the outbreak. Now, many residents say it is nearly impossible to get the health care they need to treat – or even diagnose – the coronavirus.

Expressing exasperation, doctors say there is a shortage of testing kits and other medical supplies, and it is not clear why more are not available. The ban on transportation means some residents have to walk for hours to get to hospitals – if they are well enough to make the journey. Layers of bureaucracy stand between residents and help. And the long lines outside hospitals for testing and treatment suggest that the outbreak is spreading far beyond the official count of cases.

For many sickened residents, their best hope is the new coronavirus hospital that has just been finished (a second hospital is also being built).

Those who do make it to the hospital say they are squeezed together for hours in waiting rooms, where infections are easily spread. But the shortages have meant that many are ultimately turned away and sent home to self-quarantine, potentially compounding the outbreak by exposing their families.

Many doctors and residents are putting their hopes on the two new coronavirus hospitals that China has been racing to build in Wuhan in just a matter of days. One of them spans about eight acres, has 1,000 beds and is scheduled to open on Monday. The government says 1,400 military medical workers will be deployed to work there, potentially helping with the shortage of health professionals on hand to combat the outbreak.

Ironically, the hospital, which was supposed to open on Monday, is still undergoing ‘finishing touches’, and when masses of sick patients showed up at the gates on Monday morning, construction workers were forced to turn them away.

More than a week into the quarantine/lockdown, millions of residents fear the virus has spread much further than the government realizes.

On Sunday, city officials announced plans to set up quarantine stations around Wuhan for people with symptoms of pneumonia and close contacts among coronavirus patients. But just over a week into the lockdown, many residents believe the virus has already spread much further than the official numbers suggest.

“The situation that we’ve seen is much worse than what has been officially reported,” Long Jian, 32, said outside a hospital where his elderly father was being treated. Mr. Long said his father had to go to six hospitals and wait seven days before he could even be tested for the coronavirus.

But after Monday’s market shellacking, we suspect Beijing will be diverting more resources away from meeting critical shortages of medical supplies to focus instead on arresting shortsellers and locking up ‘fearmongers’, like the doctors who were arrested by local authorities in December for trying to warn the public about the outbreak.

In just eight days, China has completed construction on one of two new hospitals in Wuhan, dedicated to treat #coronavirus patients.

Notice the bars on the hospital-room windows…this hospital is a prison with beds, as we’ve pointed out.

Following reports OPEC is weighing another supply cut to ‘rebalance’ the global oil market and warnings from economists that the outbreak could wipe more than a percentage point off Chinese GDP growth, officials in Beijing have reportedly changed their economic growth forecasts for 2020 to below 5%, what would be the lowest rate of growth since the beginning of China’s modern era of state-directed capitalism.

Of course, the fallout won’t be limited to China, and in a report published Monday, WSJ explores how the outbreak is already disrupting global supply chains and placing “additional strain” on an increasingly fragile economic expansion.

As we’ve pointed out, the outbreak has stoked racism against Chinese around the world.

If you’re looking for a quick refresher on the outbreak, here’s a short video from SCMP.

Everything you need to know about the coronavirus is right here. pic.twitter.com/zslxSZZ0rM

On a slightly more positive tip, Chinese state media posted this video about an infected woman who gave birth to a healthy baby in the middle of the crisis.

And here’s a video of a drone being used to take the temperature of a terrified civilian trapped by decree inside their apartment.

The Chinese are using drones to check people's temperature so that there is no human to human contact.#coronavirus

Finally, RT points out that the death toll from the coronavirus outbreak has already eclipsed the death toll from SARS, as the virus has spread to nearly two dozen countries and territories. The pandemic will eventually “circle the globe,” according to scientists from the NYT.

Given the fear of the virus ravaging densely populated areas, the people of Hong Kong have succeeded in pressing the city’s government to tighten travel restrictions, joining the US, Vietnam, Japan, Russia, Australia, New Zealand, Indonesia and many others.

Hong Kong has shut crossings to the mainland. But even this is likely too little, too late, as the first cases have already been diagnosed in the city.

Members of the G-7 will hold an emergency call on Monday to discuss strategies for containing the outbreak.

Get ready for another week of virus-induced craziness as this doesn’t look ready to disappear from the headlines any time soon.