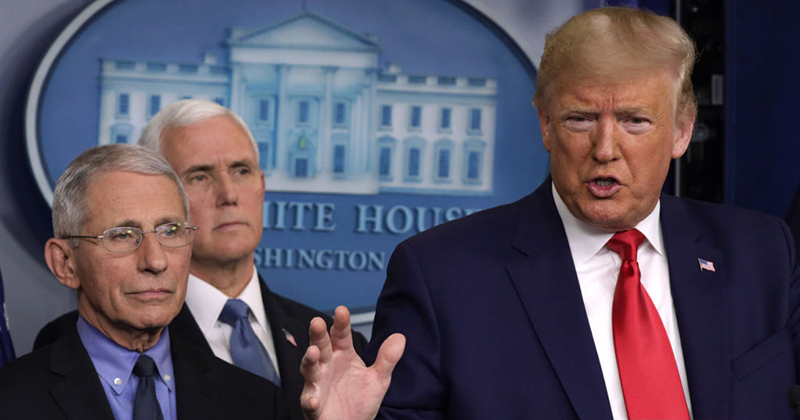 After last week blaming The President for the coronavirus spread, Democrats and the leftist media are now falsely claiming that Trump said the entire outbreak is not real.

Politico published an article Friday claiming that Trump called the coronavirus a “hoax” at his rally in South Carolina.

The article claimed that Trump “tried to cast the global outbreak of the coronavirus as a liberal conspiracy intended to undermine his first term.”

In reality, Trump referred to “politicizing” of the coronavirus by Democrats as “their new hoax.”

The President clarified his remarks over the weekend, noting noting that he was “referring to the action that they take to try and pin this on somebody because we’ve done such a good job.”

“The hoax is on them. I’m not talking about what’s happening here. I’m talking what they’re doing. That’s the hoax,” Trump said, according to NBC News.

Here it is, folks. With a pandemic at our doorstep and the country looking to its president for leadership, Trump decides to call the coronavirus… a "hoax."

Bloomberg repeated that claim in an interview with CBS, prompting host Scott Pelley to correct him:

Michael Bloomberg repeated the false claim that President Trump referred to the coronavirus as a "hoax."

CBS News' Scott Pelley pointed out that President Trump actually said the media & Democrat hysteria about the government coronavirus response was a hoax, NOT the virus. pic.twitter.com/HmSWsnaQFw

“He said that the Democrats making so much of it is a Democratic hoax, not that the virus is a hoax,” Pelley told Bloomberg.

Mini Mike simply ignored Pelley, and argued “This is up to the scientists and the doctors as to whether there is a problem,” adding that Trump’s response to the coronavirus outbreak has been “ignorant and irresponsible.”

Meanwhile, over at CNN, the mental gymnastics went a step further, with Inside Politics host John King saying that “you can read this how you wish” as far as Trump’s ‘hoax’ comments go.