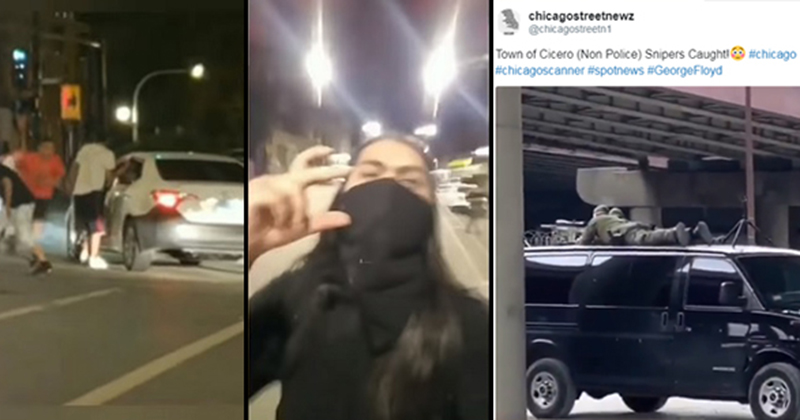 With the media being furious with towns like Yucaipa and Snohomish where “white men with large guns” were seen defending their neighborhoods, it’s rather remarkable how little attention they’ve given to the Latin Kings street gang aggressively purging their neighborhoods of “looters” in the suburbs of Chicago.

In Cicero, Illinois over the past few days there were multiple shootouts and people were seen ramming trucks into looters’ cars.

Two people were killed and 60 were arrested.

Frankly, it’s hard to say how much of this was targeting “looters” versus just targeting anyone black who happened to be driving through, there seemed to be a mix of both. 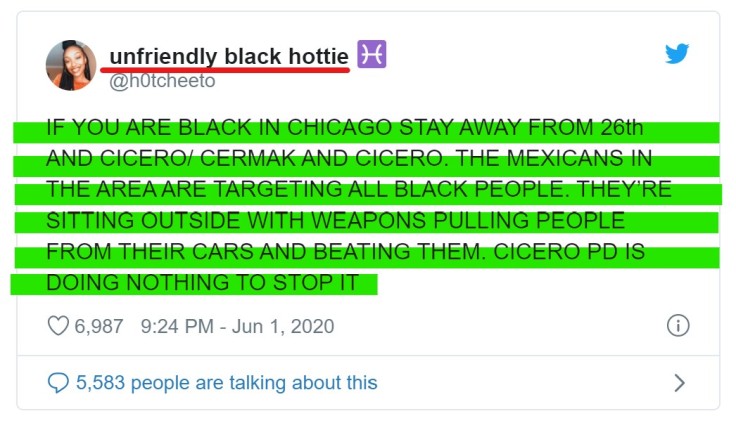 That said, there’s no question that if scenes like this occurred in Yucaipa or Snohomish it would be the top story in the country.

The NBC 5 chopper is over a pretty active scene in Cicero where tons of arrests are being made… Except this guy pic.twitter.com/NmlHOYVXX1

‼BLACKS ARE NOT GETTING TARGETED BY LATINOS IN CICERO, LOOTERS ARE‼

Latin racism is a LIE leftists race hustlers & liberal #CriminalCoddlers want you to believe so you stop protecting your businesses from looters.

Liquor Store in Cicero gets robbed.
“There’s more in the back.”
Police rush in & find 2 guys hiding in a back storage closet.
At least one gun & drugs were found.

‼Liberals are actually covering for looters by playing the race card‼#chicagoprotest#TrumpOrLooters pic.twitter.com/hV91kOspzv

Latin business owners should be armed to the T so they can be prepared to protect their property AT. ALL. COST. PERIODT!

I can't tell you how freeing it is to not feel a single bit of remorse for this.

Thank you for cleaning up our streets!

Our communities will never be safe for families until these criminals are FULLY REMOVED from our streets.#TrumpOrLooters#chicagoprotest#BackTheBlue pic.twitter.com/BKd4IQgIkK

“There were a lot of rioters that just wanted to take advantage of this,” said Ray Hanania. “A lot of them were standing right here on the street throwing rocks and bottles on the street as cars were coming by.”

The Cicero Police Department said more than 100 local officers along with 120 state and county police officers were dispatched to protect residents and businesses. Two people, both men in their 20s, were found shot to death at different locations. Three suspects in one of the shooting have been taken into custody, police said.

[…] Protesters returned to the streets Tuesday just steps from Village Hall, calling attention to what they say has been a growing tension between African American and Latino residents. Organizers said there were widespread reports that Latino gang members were allegedly protecting their neighborhoods and harassing black residents.

[,…] Cicero officials said they were unaware of those allegations.

You can see the second video above that someone in a truck rams a looter’s car then the cops drive up right behind them, get out of their patrol car and chase the looters down. That certainly suggests the two groups were working together.

Apparently, one of the Latin King’s leaders was allegedly killed in retaliation (AP/Reuters journalists are not particularly interested in covering gang violence in Chicago, so I can’t find any other sources).

According to Wikipedia, the suburb of Cicero is 90 percent Hispanic, with 80 percent of residents being of Mexican descent.

“The 1980s and 1990s saw a heavy influx of Hispanic (mostly Mexican and Central American) residents to Cicero,” Wikipedia says. “Once considered mainly a Czech or Bohemian town, most of the European-style restaurants and shops on 22nd Street (now Cermak Road) have been replaced by Spanish-titled businesses.”