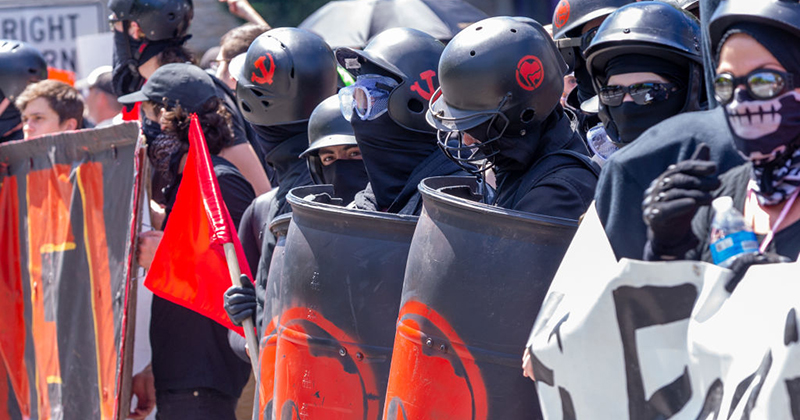 The mainstream media would have us believe that the protests and riots that have swept the nation after the death of George Floyd are spontaneous demonstrations whose large turnouts validate the notion that the ideas they argue for— such as abolishing the police — are widely popular.

The average American does not have a full understanding of how much time and money it takes to pull off mass organization such as the one currently taking place. But at The New American, we have long reported on the vast amount of money and institutional resources being poured into Black Lives Matter and Antifa by global elites such as George Soros.

That these radical insurrectionists are so highly funded, organized, and armed should be a cause for concern among Americans and inspire patriots to greater involvement in the well-being of their local communities.

Nevertheless, many continue to write off Antifa, BLM, and other left-wing revolutionary groups as nothing more than unorganized college kids who, should they turn violent, could swiftly be dealt with by a lone gun-toting patriot.

Yet reality presents a far different picture. A recently published document by rioters in Minneapolis who successfully ran police out of the Third Precinct reveals an understanding of the principles of fourth-generation warfare, along with a well-honed level of coordination.

In short, what we’re dealing with is more than a mere unruly mob. It’s a well-planned rebellion playing out on the streets of urban America.

Published at the blog CrimethInc, which describes itself as a “rebel alliance” and a “think tank” for “anonymous collective action,” the article is titled “The Siege of the Third Precinct in Minneapolis: An Account and Analysis.”

“In this anonymous submission, participants in the uprising in Minneapolis in response to the murder of George Floyd explore how a combination of different tactics compelled the police to abandon the Third Precinct,” reads a summary of the breakdown, whose author remains anonymous.

The author explains that the key to their victory over police was the combination of violent members of the “crowd” with nonviolent ones, the latter giving the former cover to attack police while making law-enforcement officers hesitant to hit back with lethal force:

We call the battles of the second and third days at the Precinct a siege because the police were defeated by attrition. The pattern of the battle was characterized by steady intensification punctuated by qualitative leaps due to the violence of the police and the spread of the conflict into looting and attacks on corporate-owned buildings. The combination of the roles listed above helped to create a situation that was unpoliceable, yet which the police were stubbornly determined to contain. The repression required for every containment effort intensified the revolt and pushed it further out into the surrounding area. By Day Three, all of the corporate infrastructure surrounding the Third Precinct had been destroyed and the police had nothing but a “kingdom of ashes” to show for their efforts. Only their Precinct remained, a lonely target with depleted supplies. The rebels who showed up on Day Three found an enemy teetering on the brink. All it needed was a final push.

As the author noted, the radicals’ goal was to stir the police to violence: “It’s important to note that the dynamic we saw on Day Two did not involve using non-violence and waiting for repression to escalate the situation. Instead, a number of individuals stuck their necks out very far to invite police violence and escalation.”

But once officers moved to engage, the mob employed their “peaceful” members to discourage reprisal, “interrupting police violence with strategically deployed ‘innocence’ (‘Hands up! Don’t shoot!’).”

The analysis goes on to relate that the crowd learned to quickly deal with tear gas by setting up eye-flushing stations with the help of on-scene medics. Once they learned that concussion grenades are not physically harmful if one is more than five feet away from them, the crowd remained calm when confronted by that type of weapon.

The insurrectionists also used looting as a battle tactic. “Looters can help feed and heal the crowd while simultaneously disorienting the police. In turn, those going head to head with the police can generate opportunities for looting,” the article reads.

“Employing stores of looted bottled water, many people in the crowd were able to learn and quickly execute eye-flushing,” it states about their response to tear gas.

Of course all this ignores the biggest weapon in their arsenal: Sympathizers in the government who keep the police from taking decisive action against them.

The analysis closes with a section titled “Visions of the Commune,” a description of the agitators’ reveling in the mayhem they created:

As the police made their retreat, a young Somali woman dressed in traditional garb celebrated by digging up a landscaping brick and unceremoniously heaving it through a bus stop shelter window. Her friends — also traditionally dressed — raised their fists and danced.

A masked shirtless man skipped past the burning Precinct and pumped his fists, shouting, “COVID IS OVER!” while twenty feet away, some teenage girls took a group selfie. Instead of saying “Cheese!” they said “Death to the pigs!” Lasers flashed across the smoke-filled sky at a police helicopter overhead.

A young kid who couldn’t be more than seven or eight years old walked up to us with a whiskey bottle sporting a rag coming out the top. “Y’all got a light?” We laughed and asked, “What do you wanna hit?” He pointed to a friendly grocery store and we asked if he could find “an enemy target.” He immediately turned to the US Bank across the street.

If the nation’s patriots don’t cease their underestimation of the Marxsist revolutionaries and rise to the occasion, the “Commune” will soon come to every neighborhood in America.